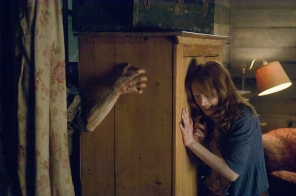 For this week’s Midnight Screenings, being that Halloween is upon us and all, here are reviews of three modern would-be Halloween films destined for years of “Midnight” Screenings all throughout the land.

This decade’s Shaun of the Dead or Evil Dead, the horror comedy classic that will entertain college dorms on Halloween for years to come, arrived early this time around, or so I’m told. Truth be told, I don’t quite see it – The Cabin in the Woods is far too dialogue-heavy and not nearly as formally textured as, for instance, Evil Dead II or even Drag Me to Hell, to name a few more famed genre deconstructions. Put more simply, while Sam Raimi’s films were loving analysis of the raw filmmaking of horror, careful, deliberate, studied commentaries on the cuts and the edits and the mise-en-scene of the whole genre, The Cabin in the Woods is essentially just a bunch of drunk friends’ loose jokes made about horror movies transported to a movie all their-own.

The central joy of the film may be the sheer fact that it exists at all, that Whedon and Drew Goddard basically just made a movie out of a late-night drinking session they probably had with a horror movie on in the background (a lesser talent like Kevin Smith would literally reveal his lesser film Tusk to be exactly this, incidentally). This is also its central issue: it always exists external to itself, as a series of signifiers that can only be referenced. Sam Raimi’s horror-comedies, extremely obvious reference points here, were actual re-readings of horror mechanics, intellectual exercises of how to scare and its relationship to how to induce laughter, but they approached their genre from within, through their filmic form. They are what they are critiquing, in other words, and that is a dangerous, provocative beast. They don’t need jokes about films, for the comedy exists in the pure self-reflexive horror filmmaking. Cabin is all jokes, and that is an altogether cheaper and more detached filmic critique. While Raimi was always able to experiment with himself, The Cabin in the Woods is mostly content to remind how it is aware of things that exist outside of itself, something it does at every turn, and something that is a tad tiring over the long haul.

The thing is though, they’re pretty damn good jokes. And while this film is busy missing greatness as it slums in its own self-conscious cleverness and lack of texture (especially toward the end, when it goes off the deep end), it has a hell of a lot of chutzpah and good-time cheer while it’s missing that greatness. The film’s got problems, but it’s downright infectious. And it begins with a bang: two depressingly mild-mannered office types done up in pastel whites and played by the two best archly smug, self-deprecating, downright bored character actors around, Richard Jenkins and Bradley Whitford, talking about essentially nothing and doing it in increasingly vague, suspicious terms. Before, of course, a monstrously giddy late-title card informs us like the gates of hell that this is the “Cabin in the Woods”, despite the environment we’re observing, all white and clinical and detached, being about as opposite what one would suspect when hearing “Cabin in the Woods” as possible. The film never equals this opening moment again, although it gives it more than a few game tries.

Where we go from here seems to anger people, insofar as the act of me telling anyone what happens from here seems to enrage the film’s ardent fans. This is perplexing since the film doesn’t really have nearly as twisty a narrative as it thinks it does, and only the most willfully ignorant of viewers could not see the rough outline of where the film is going by the quarter mark. That’s fine though, as the film places as much stock in going exactly where you expect as it does in subverting these expectations. And it’s genuinely funny, with Whedon’s way with archly-ironic dialogue not so much a distraction here when the whole film is essentially revealed as a lie, a “movie” construct, quite early on.

The plot is deceptively simple: essentially five friends go to a cabin in the woods (oh that’s where the title comes from) and find themselves in a horror movie of sorts. I don’t want to say anymore, as the film continually dishes out pleasant surprises. Yes, it’s one of those “a stinging criticism of the genre…but also a love-letter to it” films. But you know what they say…there’s no better way to say I love you to an old friend than to give it a kick in the ass and tell it to get itself on track. At the very least, the satire is barbed and even acidic, really sticking the straight razor right up at the slasher genre’s throat and daring it to keep the cliché train going one more minute. In particular, the film’s implicit critique of the rampant Reaganite moralism underlying the genre mostly ends up on the right side of the thoughtfully direct/ panderingly broad dichotomy.

Does the ending go off the deep end? Yeah, a little bit. Would I have it any other way? In a film this smart, which knows just how to tease and delay full satisfaction until near the end and then let loose with a maelstrom of Halloween fun and then end just before it gets old, you bet I wouldn’t. This is a flawed film, sure. It’s a touch obvious, a bit too clever for its own good, and somewhat mechanical and detached in the way it approaches its target from above rather than within. But for all the commentary I can provide, I’ll leave with this: I saw The Cabin in the Woods in the theater twice and enjoyed it more the second time. That’s a rare film, indeed, and something to be savored.