Underwhelming audiences upon its release in 1985, George A Romero’s third Dead movie has in recent years undergone something of a critical revaluation, with some even wishfully proclaiming it a misunderstood masterpiece (a claim abetted by the fact that it is, by his own admission, Romero’s favorite among the series). Reticent yet more talkative than the previous Dead movies, this one perhaps fell afoul of audiences because,  excepting the rather gnarly ending and a few select bits earlier on,  Day eschews the expected blood-and-guts horror smorgasbord for a miasma of despondence and slowly-encroaching dread. Rebelling against the initial reception, many modern critics have claimed the film is a more deliberate, somber affair that has aged shockingly well due to its emphasis on philosophy and politics over outright gore. In all of this, how does the film stack up? END_OF_DOCUMENT_TOKEN_TO_BE_REPLACED 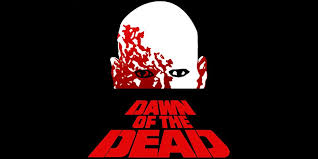 Update 2018: With all the news about the retail apocalypse, swamping America these days, it’s both curiously innocent and deceptively terrifying to return to Romero’s Dawn of the Dead as a vision of life after death where our consumer habits mark us as prematurely deceased in life anyway. In this film, the suburban consumer hub where we metaphorically (and literally) armor ourselves against assault from our zombified negative mirror-images also become our collective coffin. Because in life and death we can only think to shop, our protective shell becomes an iron maiden, America’s multi-story beacon of convenient commercialization and mid-century superiority curdled into a national self-cleaning oven.

Also, watching again, the film’s broad-side critique of masculine America’s preferred outlet for social critique during the ’70s – anti-social biker gangs choosing self-aggrandizing, mythic displacement and libertarian idealism over serious collective organizing – is all the more pressing today. Romero reads Easy Rider not simply as a hopeless quest for sanctity and a perpetual deferral of home in light of the dethroned classical nuclear family structure but a caricature of “rebellion,” an attempt by men to reinstate new social structures in ways which incline toward the brutishly male, the individualistically chaotic, and often – insofar as biker gangs and Neo-Nazis have a historical connection – the truly oppressive.

I wasn’t originally going to review two Romero films in the American New Wave series, but ’tis the season, and a horror review for the week of Halloween seemed only humane of me.

Dawn of the Dead is not a nuanced film, nor is George A. Romero a nuanced director. His scrappy, unfinished filmmaking was perfect for Night of the Living Dead, a low-budget monstrosity of the most blackened variety. The eternal concern of an independent filmmaker looms large over Dawn of the Dead, however: what hell hath a larger budget wrought? As it turns out, not much, for Dawn of the Dead manages to maintain Romero’s proudly non-nuanced filmmaking, marry it to some proudly non-nuanced social commentary, and elevate both to a sort of mythic nature that doesn’t need nuance when it can replace it with chutzpah and fearless gusto. And if Romero in 1978 as a director had anything, it was chutzpah and fearless gusto. END_OF_DOCUMENT_TOKEN_TO_BE_REPLACED

Note: this review is something of a repurposed college-age article, so be kind to the writing…

Armed with a 114,000 dollar budget, a few low-quality cameras, a non-professional cast, and its hopes and dreams (not to mention its fair share of nightmares), George A. Romero’s 1968 game-changer Night of the Living Dead wouldn’t seem an “ambitious” project on the surface. Or even one destined for competence. And that’s exactly why it’s so thrillingly disconcerting. It has, and needs, only one ambition: to scare. It eschews any hope of middlebrow competence. And due to its lean, mean, guerrilla filmmaking and single-minded obsessiveness, it doesn’t just scare – it instills a creeping, gnawing fear and doesn’t let up. Night of the Living Dead is, famously, about as economical as a film can be, with no shots wasted and nothing left up to chance – it’s a study in efficiency, but it’s more than that. It’s a study in terror.