2008’s Tropic Thunder, while far raunchier and more overblown, is the closest mainstream American cinema of the 2000’s has come to its own Sunset Blvd. While it was marketed as something of a comedy poking fun at war movies, that is only true by technicality. The narrative of the film, as such, has the movie stars making a war film let loose in the jungle where they must 1. survive, but more importantly, 2. battle their egos and the fact that their struggle isn’t just a test designed to help them work as a team in the name of making a better movie. If it pokes fun at war movies, that’s because the film is primarily a mockery of the filmmaking process at large, and more specifically, the actors, producers, directors, agents, and everyone else in Hollywood who combine limited skill with limitless, towering, monumental egos. END_OF_DOCUMENT_TOKEN_TO_BE_REPLACED 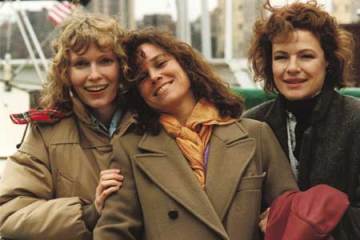 Four years later, I remain enamored of Hannah and Her Sisters, an apogee of Allen’s career, and something of an inflection point, or a balancing act. While his earlier films sometimes labor under pretenses to classical status – for instance casting themselves as Allen’s “Bergman” film”, his “Russian literature” film, etc – Hannah and Her Sisters casually commands the concerns and quandaries many of those earlier texts and artists engaged in, without Allen ever having to ennoble his meditations with unearned and overly-belabored comparisons to bygone figures that sometimes blot him from encouraging his own dramas when he chooses merely to recreate the dramas of others. At the same time, Hannah proves the mettle of Allen’s own intellectual and emotional gambits and thematic vexations without dipping, as so many of his later films did, into self-mocking-but-actually-self-exonerating parables of gender and class that quietly validate Allen’s own persona while pretending to loudly vilify him. While so many of the women in his later films exist to drive Allen forward in bas-relief, the titular figures of this film rhyme with, reflect, and inflect aspects of Allen’s consciousness but are not beholden to it. Nor do they take the position of symbolically representing Allen while having their eccentricities, personal quagmires, longings, and questions sanded-away to fulfill the tidy summation of a gendered archetype or a manifestation of a larger thematic issue. Of all the women in Allen’s cinema, they seem to, if not float free, vacillate in non-schematic ways and vibrate with their own energies. What a wonderful film.

Woody Allen has made many great films, and, as has become too obvious of late, many less than great ones. Generally, he’s at his best when things are at their most unsentimental and nervy – he’s on less sure footing when it comes to exploring purely positive, uncomplicated depictions of his characters. But for all his cynicism, Allen loves people. Or more appropriately, he uses his hate for people to deal out tough love for them, and this was never more-so true than in Hannah and Her Sisters, his only true masterpiece of mostly unaffected romantic sentimentalism and unapologetic sweetness (to go with his not insignificant number of masterpieces of far more troubled, anxious cynicism). END_OF_DOCUMENT_TOKEN_TO_BE_REPLACED