If 1999 is an important year in cinema history – which most believe it to be – The Iron Giant is arguably the most important single film in the entire year’s canon, beginning as it does a great trend of films both wonderful and abysmal we have not yet escaped from: films based off of Pete Townshend concept albums.

I kid. But The Iron Giant is important for what it reveals about the year 1999: the trend of important directorial debuts, either formal “first film” debuts or debuts into the mainstream by independent directors who had directed a film or two before-hand. One does not need to have seen any films from 1999 to understand the importance of the directors that emerged from the thick of the eye of the millennial storm to shape the contours of cinema for the ensuing fifteen years. If some of these films seem wobbly today, they at least signaled the arrival of important cinematic voices for the ensuing decades. END_OF_DOCUMENT_TOKEN_TO_BE_REPLACED 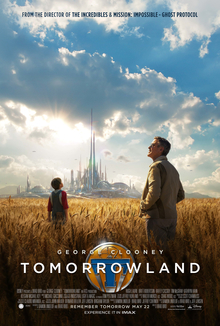 It is both poetic irony and a great shame that Tomorrowland shares two features with its fellow May 22, 2015 wide release, Gil Kenan’s Poltergeist remake. First, both films boast directors who are inordinately perfect for the films they were matched with. Second, in each case, that director didn’t do their job, or found themselves victims to outside interests. In both cases, the acquisition of the ideal candidate for shepherding a certain film did little to actually ensure said film was any good. If nothing else, this phenomenon tells us one thing: auteur theory, and the idea that a director can do anything to ensure their films will reflect the core of their talents and personhoods, ain’t everything when all is said and done. END_OF_DOCUMENT_TOKEN_TO_BE_REPLACED

Where-as most film series tend to decline in quality with age, time has been kind to Tom Cruise and his chosen cash-cow, the Mission Impossible films.  While this 2011 entry lacks Phillip Seymour Hoffman’s deliciously bored villain, no small part of why III was the best entry in the series up to that point, it’s an improvement in just about every other way. Above all, and most surprisingly, it has a sense of humility. In its treatment of its characters less as too-kewl-for-school icons and more as confused, kinda-wacky cartoon personalities defined less by their self-serious gloom than much smaller, much more affecting and endearing character moments, it finally approaches a sense of identity for a series that often seemed happy-go-lucky to ape other franchises. This is a “big” film, but it doesn’t feel “big” in the way other blockbusters do –  it has a lived-in quality, less about one man doing stunts than a team struggling to get along and admit they’re enjoying themselves while doing it (although it certainly has plenty of the former as well). At times, it even mocks the self-seriousness of other blockbuster franchises, and implicitly, itself in the process.  It would appear what they say about looking back on your misfortune with a smirk is true. At the least, MIIV believes it is true, and it wants us to know it too. END_OF_DOCUMENT_TOKEN_TO_BE_REPLACED