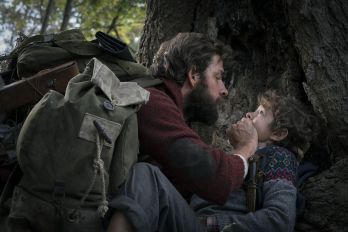 Noise kills, and that old trope of a horror film narrative device is given a sturdy work-out by director John Krasinski in A Quiet Place. Himself playing the male lead and casting his wife as his on-screen partner, it seems self-evident that A Quiet Place treats its horror as a distinctly personal affront, and his craft belies the care he put into this production. This, in other words, is personal for Krasinski. But, if this film relies on horror as personal threat, it is definitively not an existential threat here: the bestiary of A Quiet Place is a threat to an assumed normative domesticity rather than a question for it. Family-hood is pro forma here, a way to appeal to an audience’s basest fears rather than reconsider them. In a film like A Quiet Place, women give birth because, well, why would one ask?

Although constructed around a series of set-pieces, the film fancies itself an allegory, or, at least, it unconsciously becomes one, a moral tapestry, a paean to, of all things, the nuclear family. Dropping us into the world of the Abbott family – wife Evelyn Abbott (Emily Blunt), husband Lee Abbott (John Krasinski), and children Regan (Millicent Simmonds), Marcus (Noah Jupe), and Beau (Cade Woodward) – in a post-apocalyptic world, we (and they) are immediately overrun with feverishly, demonstrably effective monsters who are attracted to noise. But because young Regan is deaf, the family already knew sign-language, and has managed to survive around that knowledge, erecting, with the obvious attendant familial affection for one another, a system of tenuous survival.

Ever-tenuous, courtesy of the fact that Evelyn is pregnant, and the immanently-arriving baby – prone to crying, etc – obviously poses a problem for the family’s system of carefully cultivated, silent communication. It’s clearly effective, as far as it goes, and the family’s attempts to outmaneuver and avoid the monsters around them offer minor pleasures for the audience: a set-piece based, out-of-the-frying-pan-into-the-fire depiction of fright. A Quiet Place is obviously focused on the experiential texture of a life where conventional narrative structures – go to work, have an adventure, fulfill one’s destiny – no longer apply, and where existence is but a string of incremental moments and near-survivals tenuously linked by the moral fabric of “family”. Which is to say: this particular family has nothing to live for, no narrative to thrive on, except, of course, the normative narrative of “family” itself.

But that’s one of the foundational narrative fabrics we have in our American tapestry, anyway, an old chestnut here given a vigorous showcase which exposes a particularly insidious variant of populist, Silent Majority survivalism, an implicit acceptance, entirely unquestioned, that the ultimate moral virtue in life is to bear children. The film is implicitly traditionalist, perhaps more as a matter of reclusive timidity and refusal to experiment than conscious decision. But that’s the most insidious caliber of politics, the kind which wraps itself around ostensibly neutral gestures and axiomatic principles – “Evelyn has to give birth” – that are ultimately more arbitrary than the film, with its quietly but discreetly managed bifurcation of gendered roles, would have us believe.

In fact, those gender roles more or less expend the characters’ personalities in A Quiet Place, where people only exist to fill-out their narrative archetypes. Absent any sense of minutiae or psychology or personal sensibility, they are defined primarily by their rote, predetermined commitment to one another, a kind of archetypal ur-family that exist to fill-out iconographic types: the strong, (hyper)silent dad, the mom confined to the household, etc. Evacuated of any depth, they’re obviously ciphers, which is the surest sign that the story is meant to be taken allegorically, the family as a kind of totemic beacon of Americana, a mythic template of advice to live by, not characters to explore or investigate or self-complicate.

But that’s the only viewpoint A Quiet Place has, and even then, to call it a viewpoint perhaps gives the film more credit than it deserves. The actual visual texture of A Quiet Place is crafty yet un-prescriptive, charged with only mere efficiency, no sense of perspective, be it violent giddiness or virulent injuriousness. That it has no particular thesis on the nature of the world it has wrought isn’t intrinsically a problem, but Krasinski’s film doesn’t even betray a desire to consider one. It just seems to assume this is how things are, how they go, how they always will be. There’s no sense that the film has any real grasp of this family, no sense that they exhibit any desires outside the scenario the film cordoned off for them, no sense that they’ve really thought about what family means in this new world. Admittedly, at some level, there’s an appealingly tight-lipped brutality to the piece, as though there’s no room for existential quandary or personal meditation; every situation is first and foremost a problem to be solved before it can ever be a question to be explored.

And in that sense, one could manufacture an argument that this family is beholden to the types society has given them, reproducing just to have something to do, merely to fulfill a sense of “family”. Maybe they don’t exactly have time, let alone the will, to consider the arbitrariness of social constructions. But even on purely mechanical terms and with a single-minded goal, the film doesn’t have the courage to raise the realist problems this might raise. Namely, why have the baby in the first place, especially when it so obviously harbors ill will for the currently-living children the parents obviously bestow such compassion on, and would protect at all costs. A Quiet Place has the narrative vagueness of a fable, and once or twice – the phenomenal, near-silent introduction – it becomes charged with the imaginative abstraction necessary for a fable to work. Mostly, though, A Quiet Place is at once too naturalistic – without nearly the level of cinematographic abstraction required – to function as fable, but not realist enough to consider other physical or mental truths outside the one’s it’s prematurely settled on.

Would that A Quiet Place either meditated on its theme, truly and emphatically considered it, or simply evacuated itself of theme altogether. And it sometimes does, to a point. As an allegory for the sanctity of the holy family, a survivalist paranoia sop to those who feel the family is being besieged from all sides, it vacillates between being rooted in this moralistic principle and forgetting it entirely on the path to its showpiece sequences, adequately-staged and sometimes even seismically, compulsively watchable (as in that killer, literally and metaphorically, intro). But it’s never inspired; even its moral it takes as a matter of fact, not consideration. And, for all the “show, not tell” awards the film has been reaping, did it really need the whiteboard carefully and cynically answering all the film’s questions and voicing all the characters’ thoughts for us? If it really is a masterpiece because it depicts a world where characters can no longer discuss existential issues because their very survival depends on leaving them unquestioned – if the characters can’t think about their roles, but can only fill them out – then why emphasize their thoughts at all, and why in the most rudimentary and obvious manner of simply writing them down for us?

That whiteboard, as much as any gesture in the film, is indicative of how little trust A Quiet Place actually places in its audience. And for all its skillfull thrills, it’s only ever slick, never sick: only intermittently and negligibly does the film truly tingle and tense up, as though its characters’ nerves were enmeshed with the film’s cinematographic perspective, the shots and sounds embodying the protagonist’s fears. Krasinski’s camera phenomenally sculpts horror for us, but it does not ask us to feel terror. Sure, there’s a rogue, inspired gesture flinting around here and there, an ember in the darkness alighting a path out of the murky world of cinematic competence: the designs on the heads of the film’s monsters are spectacularly Lovecraftian, almost non-Euclidean in their imaginative geometry. But we’re hardly wanting for great horror at the tail end of the ‘10s. With films like Hereditary actually daring to dislocate audience empathy and Mandy (which is basically that one image of Tarkovsky reading Heavy Metal magazine given cinematic life) deflowering horror’s very form, a veritable warren of debased, deformed cinematic creatures crawled out of the social and political cesspool of 2018. The same was true in 2017. And 2016. And 2015.  A Quiet Place is studied and skillful, certainly, but absolutely hollow by comparison.