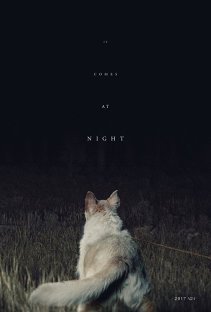 Vis-a-vis the more trimly-titled but flabbily-filmed It: now this is more like it.  The second feature from Trey Edward Shults, It Comes at Night trades out the high-gloss carnival-esque of Muschietti’s film for the kind of slowly-curdling angst and stomach-rotting apprehension that not only startles the hairs on the end of your arms but rattles and disquiets the bones. It Comes at Night is not peak horror compared to some of the recent finds in the genre since 2010 – It Follows, to name another title to wield the willful ambiguity of one particular pronoun – and this new film manages the unfortunate (commendable?) feat of being both too literal and too equivocal for its own good. But compared to the lazy imprecision of It, Shults’ film is a real wilderness of human fear.

Beginning with a bruised scene of a sickened old man being wheeled out by Paul (Joel Edgerton) and Paul’s son Travis (Kelvin Harrison Jr) to be shot, It Comes at Night initially introduces us to the barren, sorrowful wooded exterior that the two, along with Paul’s wife and Travis’ mother Sarah (Carmen Ejogo), have abandoned society for. Scraped free of any expository prose, Shults refuses to banalize the obscurity of the situation by doing what most films would: easing us into this world through information and context. Instead, the wonderfully dispirited quality of the filmmaking galvanizes the ambiguous implications at the heart of the screenplay: the questions of who and where these people are, why they’re there, and, ultimately, what drives them to perform the actions they undertake before the film’s end.

These actions are instigated when another family – father Will (Christopher Abbott), mother Kim (Riley Keough), and son Andrew (Griffin Robert Faulkner) – request admittance to the abode that Paul protects with authoritarian fastidiousness. If the world is abandoned though, the project of this film is to explore whether Paul’s home – or his actions – are any proof that compassion or humanity still burn cloistered away within the wretched confines of the desire for personal security. (Obligatory Trump-era-cinema references could go here, but I’ll refrain because they reduce some of the more primordial concerns here). Many diseases afflict the characters of It Comes at Night, and not all of them are afflictions of the corporeal variety.

Although Night of the Living Dead is an obvious touchstone here, It Comes at Night offers its own complications. With the presence of a second family – particularly in Edgerton’s cragged, weary face – the film self-complicates, raising numerous confounding emotions ranging from the momentary hope of not only increased defense but human compassion to the sense of personal affront when Will teaches Travis a tip about chopping wood, threatening Paul’s patriarchal supremacy, his little slice of control. All the while, It Comes at Night plays with our expectations of not only of what it is but whether it – possibly the murderous underbelly of masculine heroism and father-knows-best subservience to authority – was already there to begin with.

Shults also delves deeply into the horror director’s bag of tricks and pulls out all the ideal stops, primarily cinematographer Drew Daniels’ vast patches of negative space which carry un-fortuitous premonitions of anything lurking within them, potentially mobilized to whatever baleful intentions this ambiguous it may see fit.  It Comes at Night harnesses perhaps the most abject horror of cinema – lacking vision in a visual medium – and what it does allow us to see is an extraordinary mélange of grisly nothingness and beautiful emptiness. For an almost ritualistic shot of a blood-red door frequently imaged in wide-screen, the camera tracks to the door at a pace more like a sluggish squeeze or pull than a confident walk, ultimately implying a tempestuous internal push-pull between abject terror and uncertain curiosity.

Admittedly, It Comes at Night is occasionally a little leaden in its appropriation of minimalist-movie tropes. Sometimes, what paradoxically allows the film to explore and imply more elemental social connections can also sometimes feel a touch contrived, as though the film is willfully omitting realization rather than sliding into a world where explanation and context are no longer especially relevant. But playing stingily with explanation is a much more welcoming feat in this day and age compared to treating every scene as a concession to the audience’s need for logic or capitulating to the commonplace failure of demanding certainty at any cost, a failure which, incidentally, is the source of the film’s characters’ undoing. Freshman-ambiguity aside, It Comes at Night is a near-great calling card, a portrait of social breakdown that doesn’t even report back to “society” with nominal or obligatory images of the rest of the world. It harbors no illusions that the particularities of “how” the infection sweeping the country manifested actually matter to its tale of existential terror; like most great films, even if this isn’t a great film, its relationship to the real world is emotional, imaginative, and philosophical rather than merely technical and factual.