With their new album releasing later this month, a retrospective of possibly my favorite band of the 21st century. I didn’t include Like Clockwork because it can already be found in another list, but it is well worth seeking out.

Queens of the Stone Age

Rising out of the ashes of the deceased desert-rock band Kyuss, the first Queens of the Stone Age album still bears the outline of its predecessor, but it is a promiscuous, rogue offspring rather than one that adheres entirely to its parents’ wishes. Josh Homme’s band retains the pulverizing, disagreeable, sun-burnt core of Kyuss, but they wear their proto-metal influences more lightly, letting in a more diffuse palate of melancholy and wry, cunning cheekiness, as well as more air and buoyancy into the notes. On their debut, listen to them inaugurate their two-decade career reanimating the corpse of rock ‘n’ roll not by sacralizing it as it was, but by authorizing a morbid, cut-up collage of body parts strewn from the comatose bodies of different bands. They are rock’s Dr. Frankenstein, and the electric charge that gives their creation life is deceptively radical instrumentation and their unique aura of ill-natured humor.

It’s easy to pigeonhole the band as an essentially classicist, backward-thinking entity, but they outflank their primordial riff rock with modernistic touches such as Homme’s liquid, even gender-fluid Jekyll-and-Hyde voice – osmosing from masculine lizard-lounge croon to frail and effeminate on a dime – and the disquieting fragility of the staccato guitar heroics that prefer to jab into the melodies like a shiv rather than serve as their skeleton. Homme’s desert wanderers respect rock without being hemmed in by it or stymied by an antiquarian sensibility. They treat the genre not as a cadaver to faithfully embalm and preserve but as a toolkit to draw from, a toybox to play with. 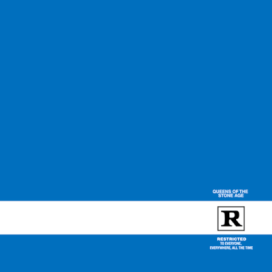 On their superior follow-up, the artistic touches and the devilish aura that percolated subcutaneously on the debut truly take root. their first album could be accused of being Kyuss-light, a specious under-cover-of-darkness affair between Homme’s old band’s molten metal and his newfound pop instincts. On the debut, the two attitudes kindled a lightning-fire of opposites rather than neutralizing one another, but Rated R is definitively its own party, trafficking in vicious, ruthless riffery but tempering it concoction with unexpected, fugitive elements such as the hazy sickness hanging over “In the Fade” and “Auto Pilot” (perennial partner-in-crime Mark Lanegan lends his diabolically bruised howl to the former).

Or the predatory bad-trip opening number “Feel Good Hit of the Summer”, a Black Sabbath song cross-pollinated – or infected – with a scuzzed-out, radically disheveled punk spirit and then tightened-up like a jackhammer into your brain.  “Monster in the Parasol” taps into the same spirit that animates any carnival of the damned, and the songs on the back half of the album – particularly “I think I Lost My Headache Again” – flaunt their disinterest in conventional song structure. If the album’s opener pummels down into you to split open the skull, this conclusion song represents the mind, now liquefied by the nine songs in between, vaporizing into the air so it can break free of the limits of conventional music – and mental  – form. 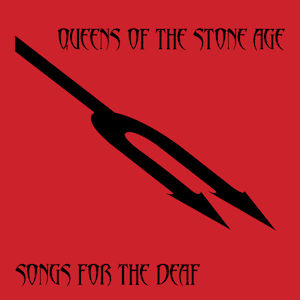 Songs for the Deaf

Likely to forever remain their apex, Songs for the Deaf harnesses the band’s burnt ends and jagged edges into the most illicit sound produced by any rock band of its decade, not unlike a murderer’s row of fugitive instruments and sounds barely wrangled into submission without being domesticated. Much as I appreciate Jack White’s rock ‘n’ roll revivalism and attitude toward rock as a spinning-carousel of antiquarianism, carnival-barking, and demented performance art, Songs for the Deaf burrows into the genre’s salacious and deviant, disrespectable spirit with a toxic glee. Opener “You Think I Ain’t Worth a Dollar, But I Feel Like a Millionaire” is in the middle of a séance with the deceased Kyuss, conjuring their deliciously unsanitary, truly unholy brand of tetanus-rock right from the get go.

The necromancy already over, Homme slides right in to the sordid “No One Knows”, the song that broke the band big and slithered into rock radio  (at its most turgid circa 2002) and uplifted it by corroding it from within, kicking it back into the ditch where Neil Young rightly knew the genre belonged. That song is pure pop-rock heaven, proving that airy pop and much heavier stuff aren’t so insoluble after all. But expansive numbers like the sunburned “God Is In the Radio” the paranoid “Hangin’ Tree” and especially the gruesome twosome of “A Song for the Dead” and “A Song for the Deaf” bring us back to hell. They were born on Queens of the Stone Age and came of age in Rated R, but with Songs for the Deaf, the band attains consciousness, achieving Nirvana as well. Oh, and having Dave Grohl animalistically pounding the drums on the whole album doesn’t hurt either.

The relatively sedate chaser to the acid-and-whiskey solution of their previous album, Lullabies to Paralyze suffers slightly because its back-half puts you to sleep in the wrong way. But the depressive vibes the album effuses are an identity of their own; these new downer-drugs don’t radically reorient the band or diametrically oppose their previous albums, but Lullabies to Paralyze is less stormy than previous albums. Which doesn’t make it more tired. More like cold-blooded, cruelly disinterested and malevolent while Songs for the Deaf was vital and predatory. Rather than a full-on maelstrom, Lullabies is the first suspicion of inclement weather, the skies darkening as renegade shimmers of light (and hope) decompose into darkness.

Even the zestiest number, “Little Sister” is loaded-up with glimpses of potential violence and unspoken desire sublimated to the point that a horror movie is just around the corner. “Everybody Knows That You’re Insane” is still fierce, even mocking, but “I Never Came” permits melancholic undertows and twilight beauty into the Queens’ apparatus of destruction, finally suggesting the hope of new creation. Until, of course, the band pulls the rug out from under you: album centerpiece “Someone’s In the Wolf” is as frightening and hopeless as anything they’ve ever done, climaxing in a harrowing, shattering finale where the pulse over-stimulates and the song collapses before our ears, accepting a kind of death foretold from the album’s first note. 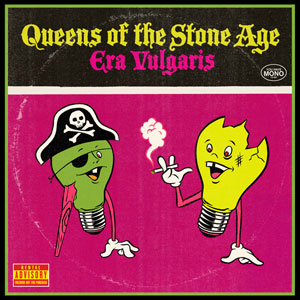 Their most unhinged and genre-dismembering album, Era Vulgaris is a ninth-inning switch-up, although not so much an evolution as a parallel achievement. Vulgaris is more vulgar, more robotic, jittier and jerkier and more avant-garde, like Homme’s demonic inversion of Krautrock twisted into a diabolical take on four-on-the-floor dance. If earlier QOTSA albums crooned with subtly menacing aplomb, Vulgaris’ songs constantly implode and explode on themselves, starting and stopping at arrhythmic, disjunctive junctures, as though every song was cobbled together piecemeal out of broken glass and shattered metal like Tetsuo: The Iron Man. Every Queens of the Stone Age album has the touch of evil in it, but Era Vulgaris is undeniably acquainted with the robot devil.

Like cold steel being dissolved by battery acid (to reference a song on the album), the lurching and computerized Era Vulgaris is metal in more ways than one, and songs like “Misfit Love” probe the schism between Black Sabbath and Television (or Berlin-era David Bowie). It isn’t their best album, but at least it erodes the apparent 21st-century presumption that rock is supposed to be clean-cut. Grafting from industrial as well as the traditional blues, Queens’ vulgarity, insofar as they define it, is primarily a defiance of stagnation, a will to deepen and renew themselves. They are vulgar not because they curse or drink or stomp around lecherously (although they certainly do) but because they flaunt their excesses and their refusal to submit to rock’s normative habits, twisting the genre from within disobediently. They do not mount a disintegration of rock music’s foundational limits and immanent elements a la Deafheaven, but they do short-circuit the current of a genre governed by music at its milquetoast nadir.