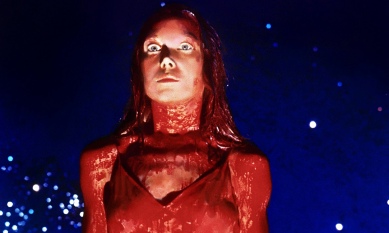 The Dark Tower is surely the biggest budgeted Stephen King adaptation thus far, releasing after a relatively long-lull since the King cinematic-adaptation factory downsized about a decade ago. With It primed to make a boatload at the box office in little more than a month, let’s take a look at a few of King’s most notable film adaptations, diamonds in a truly rough slog of visual atrocity.

With Carrie – fittingly a story about the horrors of maturation into independent adulthood – director Brian De Palma finally crawled out of Alfred Hitchcock’s attic, where he had been lurking for most of his early films, and emerged as a force all his own. It was also a smashing success, instantly making De Palma a household name, but unlike many of his latter, equally commercially viable films – Scarface, The Untouchables, Mission Impossible – Carrie does not flatten out De Palma’s iconoclastic style or collapse his rhythms by aiming for middle-of-the-road spectacle. Retaining his unique style of frazzled poetry and trading in writer Stephen King’s dry, accusatory writing for a mood of erotic melancholy, Carrie is a mosaic of depleted teenage energy, and by far the second-best King adaptation in film history. (Behind, obviously, The Shining, only a very tentative King adaptation, and the one Stephen King hates the most). Radiating unpretentious pulp, Carrie exudes a quality of social neglect and personal loss, or never really belonging, thrumming with the outsider spirit De Palma brought to all his great films. In its own devilish way, Carrie is as much of a yardstick of teenage innocence and social ostracization as any song Bruce Springsteen was penning around this time.

Carrie (Sissy Spacek, in a career-making role filled with androgynous alien energy and nervous uncertainty about one’s own capabilities), of course, is a teenage girl with no life outside of her dictatorially abusive conservative Christian mother, who depletes whatever sense of self Carrie herself might manage to summon up. Carrie’s story is a toxic cauldron of adolescent loneliness and religious sexual repression, within which brews the first dawning of Carrie’s womanly self, manifesting in telekinetic powers that armor her inner alienation and rage with a fractured-psyche physical force of murderous proportions. Most of the story is a slow and boiling progression of Carrie’s inner turmoil as De Palma envelops the audience in a mood of tragic inevitability and dour futility. Where-as most suspense shockers thrive on the unexpected, Carrie is a tone poem of grievous, lamentable, unavoidable expectation, of a slow-motion crash-course with the future that ends with the pitiless cataclysm known as adulthood.

De Palma’s much-maligned interest in the female body becomes a channel for his abnormally progressive vision of female energy as a forcibly de-sexed body realizes its own sexuality and becomes a conduit for doomed escape, as well as a reminder of our inevitable mortality. A reminder Carrie herself dishes out in spades in several of the film’s electrifyingly rapturous climaxes, orgasms of teenage vulnerability filtered through De Palma’s almost apocalyptic style peppered with rogue avant-garde touches such as modernistic split-screens that demand we acknowledge the simultaneity of multiple perspectives. De Palma has spent nearly a half-decade finding chinks in society’s armor, or more accurately, flaying society’s skin, and here his interest turns to a female reclaiming her sexuality and her body. Carrie ultimately reminds us that identity and belonging are inextricably tethered to physicality in a society that focuses, for better or worse, on the surfaces.

Thus is the epiphany of all of De Palma’s best films: his outre stylization is not a corporate balm designed to devour real substance in an onslaught of superficial looks and cheap tricks. His surface-first style is a pitch-black rendering of those very superficial looks and cheap tricks which control, create, and package society for presentation, the surfaces which do not distract from some essential, internal truth but which construct and manipulate our definition of self and truth in the first place. His depth lies on the surface, tracing the topography of society’s topsoil as a way of clarifying our deepest and darkest secrets. A mixture of professions, Carrie is Judith Butler by way of John Carpenter.

It’s also just plain great filmmaking, a live-wire exercise in the friction between exploitation and melodrama, a work that moves at the pace of a just-the-facts B movie by also retains the anti-kinetic sense of social stasis and endless returning to current states prevalent in many of Douglas Sirk’s and Manx Ophuls’ so-called “women’s pictures”. Which is a rebuke to the mantra of masculine conscious agents who structure the world though potent personal agency. Carrie, in contrast to masculine works like Dirty Harry, is not about a harmonious meeting of desire and action but the tragedy of the uncoupling of the two. Its horror is visceral and brutal, certainly, but also existentially troubling and foundationally disruptive. It questions the rational assumption that our world is determined by conscious actions which balloon as we actualize our own futures. Contrarily, Carrie concludes in a heartbreaking liminal state between intentional agent of creation and unwilling participant in a cosmic destruction; neither the narrative nor Spacek’s truly tragic performance clarify whether Carrie is meaningfully in control or aware of her actions. It initiates De Palma’s life-long interest in the question of whether any of us really are masters of our own domains, his unsettling of the very nucleus of not only populist cinema but the belief system of America and much of Western thought.