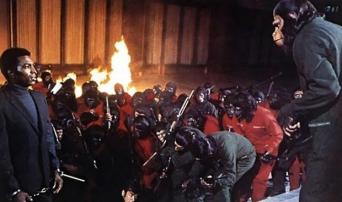 Among the five original Planet of the Apes pictures, 1972’s Conquest of the Planet of the Apes is undeniably the most obvious forebear to the modern trilogy. A review of this most unheralded picture in honor of the conclusion of the new trilogy.

Human characters run toward the screen with imprisoned apes in tow, and a quavering camera courtesy of cinematographer Bruce Surtees trembles in reverse, as if cowering in fear. This hand-held style already puts us on a different, more unstable footing than the more classically composed delights of the original 1968 Planet of the Apes, but we’re in a film that is almost as good. Conquest of the Planet of the Apes is also, in some sense, the closest analogue in the classic series to the beginning of the 2010’s series revamp, depicting the “conquest” that would become the “rise” in 2011. If anything, Conquest is even more explicit in its allegorical and essentially revolutionary nature than the modern films. Right in the thick of political disfiguration and social unrest, Conquest has Black Power on the mind and in the eyes, more overtly so than nearly any non-blaxploitation film of the ‘70s. Also suggesting America’s little venture into Vietnam, screenwriter Paul Dehn and director J. Lee Thompson hurtle right into the belly of the beast with guerilla aplomb. So many are wont to call Planet of the Apes “thinking person’s sci-fi” that they overlook how a red-hot screed like Conquest aims right for the gut.

The protagonist this time is Caesar (Roddy McDowall), the son of time-traveling apes Cornelius (also played by McDowall in the prior films) and Zera, both of whom escaped their dying future Earth run by apes and arrived in the early ‘70s, fostering a child in the process. By this film’s diegetic setting of 1991, their child has grown up and is under ownership of circus owner Armando (Ricardo Montalban), who hides from society the fact that Caesar is intelligent and can speak. That human society, incidentally, now enslaves apes as pet-servants after a disease wiped out all other domesticated animals. When Armando is murdered by the government for alleged animal sympathies, this is the final straw for Caesar, who rebels against Governor Breck (Don Murray) and his city of ape-enslaving humans.

Although Conquest  wheezes through an early monologue from Montalban that essentially recaps the twenty years between Conquest and the prior film in the series, Escape, the majority of this film rebukes the occasionally stymied, loquacious tone the earlier films could dip into when their minds were working more than their hearts. This is a gritty, grimy, toxically angry shiv of a picture, an encounter with B-picture brutality from a series with a typically more diplomatic attitude toward social problems.  It’s a surprisingly gruesome and unambiguously vicious, nasty piece of work, and it utilizes the filmmaker’s rougher, more bloodthirsty styles and darker hearts well. Thompson, a formerly-great veteran of films like the pitch-black Robert Mitchum noir Cape Fear (a less revolutionary Night of the Hunter), has little time for classical proscenium composure, instead thrashing us with his more incendiary style.

Surtees is also on fine form on a sabbatical from his grotty, dusty lensing of Don Siegel’s and Clint Eastwood’s films from the era. Hoarse and often existentially disturbing works like Dirty Harry, The Outlaw Josey Wales, and the absurdly underrated High Plains Drifter also called on Surtees’ talents, as well as the killer Arthur Penn film Night Moves, and he raises a paranoid, murderous ruckus here as well. Filming in the famous Century City office park, he uses the film’s malnourished budget to his eternal advantage. Dousing the film’s finale in a surfeit of darkness was ostensibly meant to hide the barrenness of the production design, but it ultimately evokes a more decrepit, jaundiced world whose under-population speaks to a terminally jaded sensibility and establishes a mood of brutalized loss that erupts into a violent revolt suffused in an air of futility. It’s not great cinema, but the location and the cinematography in tandem warble with an instability that galvanizes the volcanic concluding revolution with an unnatural sense of cold-blooded intensity. McDowell is frequently the only force introducing any warmth throughout, and even his phenomenal performance mostly dips into a sense of depressed, wounded resignation and justified brutality.

Conquest is also surprisingly free-thinking socially, its freedom possibly afforded due to its lower budget and the lack of producer oversight that typically ensues every time money flows less freely. The script is not explicitly connecting apes to African-Americans (and insofar as it does, it uses this metaphor for a decidedly more radical purpose than many older films). But race is never far from mind. MacDonald (Hari Rhodes), Caesar’s only sympathetic voice in the governor’s office, is not arbitrarily African-American. When he – voice drawn like a sword – responds to criticisms of the apes’ intelligence with “intelligence has never been encouraged among slaves”, his silent hostility hides reservoirs of bottled rage.

Other little touches add up. Particularly the “hire homo sapiens, not apes” sign in the background during an early protest, and the paternalistic gesture of having the apes name themselves by pointing in a book, allowing the humans to teasingly assert dominance over the servants by feigning liberal humanity toward them. Plus, it somehow feels more radical that the focus is undeniably Caesar when the film’s obvious analogue – 2011’s Rise of the Planet of the Apes – felt the need to cover-all-bases by focusing as much, if not more so, on James Franco’s middling human scientist. Again, there are better sci-fi films, B-movies, works of revolution, and Planet of the Apes films, but Conquest is hard to argue with, especially when the shadowy final battle is such a ringer. Tinted with outright horror, the finale of Conquest is a veiled Vietnam rebellion that settles us onto a scorched-earth and blazes a path to director John Carpenter’s encounters with urban strife and human evil, as well as anticipating his exploration of the possibilities of minimalistic cinema.