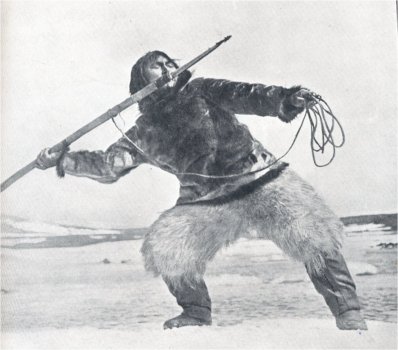 At once a howling abyss and a succulent morsel of semi-absurdist humanistic comedy, Robert Flaherty’s Nanook of the North is a film of wonderfully unresolved, immanent contradictions and multivalent constellations of primordial beauty. The most obvious dormant tension that requires surfacing is that it isn’t a documentary, at least insofar as the conventional scripture would bequeath it. No, this slice-of-life tale of “Nanook” (actually Allakariallak), an Inuit in the arctic regions of Canada, as filmed by filmmaker-explorer Robert Flaherty, was largely an ahistorical concoction fabricated to feign allegiance to the Western ideology of the Inuit as a backward Other whose life was governed by genial amusement and befuddlement at any and all Western artifacts. Many of these technologies objects were well-known to Allakariallak, a genuine Inuit who was “in” on the production of the film, as Inuit culture by 1922 had advanced well beyond the spear-wielding icon curated by Flaherty for white America’s racial memory.

So Flaherty could, and has, been accused of cooking the books in the name of an essentialist picture of Inuit life, a missive that has dogged his film in the modern era rather than, more appropriately, revitalizing it or, more accurately, opening it to reconsideration. Although initially carrying the must of a racist museum piece embalming the Inuit people in a theater of a false, racially-coded past, Nanook is also a disarming anomaly in the field of documentary or fiction, a drama of modernist, self-reflective iridescence and classical mythic fervor (two seeming opposites) all at once.

Although “exotic” after a fashion, Nanook slips in flirtatiously winking reflexive bits throughout, often courtesy of Allakariallak, a true filmic hero and a more fully-formed human being than most white male protagonists the century over. While the film dons the garb of a grand adventure, there’s a fascinating air of the domestic, even the mundane, to the film following Nanook not only as he braves the frigid temperatures but as he alights the screen with a more human form of personalized warmth, unearthing slivers of mischievous fun and satisfaction out of the world around him. You might say the camera loves him. His magnetic energy and his seemingly eternal alacrity align with his daring willingness to stare as close to the camera as possible without fully giving himself away, slyly insinuating a push-pull between him and the director in their battle to control the screen. He is a fantastic movie character, and bequeathing him with the mantle “character” is essential to Nanook’s mystery as a breeding ground for questions about the essential porousness of the documentary principle.

Through it, Nanook himself vibrates with mischief, as though wielding a dormant charisma about a world he understands and we don’t. He centers a space of desperate survival but also refuses to define his life by meager subsistence. Exhibiting a subtle evasiveness about his true role in this arctic pageant or affair, he is a tour-guide but also a rowdy, buoyant feature of the land himself. If the film is an imagination, which all films are (including the most rigorously verite documentaries), Nanook seems to imagine a certain personal self, partaking in the spirit of imaginative play, even occasionally posing, casting himself in the guise of the mythic adventure hero Flaherty may be eagerly looking for.  Without ever resorting to trivializing puzzle-like indirection and pre-meditated mechanical narrative machinations about the nature of reality, Nanook whispers that Nanook is both prey and predator, a victim of the camera and a co-conspirator of a film hunting for meaning and conjuring it simultaneously, mining the tensions in the documentary-fiction dialectic. If Nanook the character claws out a space traditionally reserved for white heroes, he also defies that space, marks it as hopelessly incomplete, by complicating “agency” and control of space with his energetically unstable and clumsy humanity, his push-pull interaction with space rather than dominion over it. He is the true every-man.

Further defying the specious assumption that documentary and fiction is a dichotomy rather than an unsettled, charged, and mutable dialectic, Nanook is alloyed to a subterranean and nearly endless well of self-reflective imagery. Replete with reflective surfaces, the igloo moment is the standout – a construct, a manmade celebration of creation connected to cinema in the translucent shots peering through the glass-paned window of the igloo, establishing a view to another world that touches our own but is somewhat abstracted, mystical, separate. This other space, the outside world or cinema, is refreshing in its simultaneous relation to and difference from our own occupied space. The opening, likewise, mounts the camera within the flow and ebb of water, a reflective surface that visualizes a refracted or warped variation on our own world, much like cinema. The camera nourishes, like water, but can also devour or drown us in the dangerous, brackish throngs of peering too closely at truths about our own existence. Like the sea, the film churns with cinematic imagination.

Even laying aside such concerns, Nanook is a startling Emersonian creation not unlike Melville’s Moby Dick, a mytho-poetic excavation of the nature of survival in an external and internal sense limned with a startling counter-current of comic play. Both are artworks woozy and brazen enough to occupy liminal spaces upon liminal spaces, not only between first and third world but tones. Moments of ritualistic natural beauty bow down before a worldly sublimity as the sun rises in the far-side of the world, but the film cheekily contrasts the supremacy of solemnity with an acrobatic Keystone-Cops clown-car routine as a nigh-unending collection of Inuits emerge from a canoe that seemingly should contain only a sole person. The high-adventure setting brings to mind Fairbanks and Valentino, but Keaton and Chaplin are never far from memory. In addition to a gold rush of quasi-documentary features, one senses that The Gold Rush itself was born out of a trip to a theater where Nanook was braving the cold with smirk and physical ingenuity in hand. Nanook not only survives; in the Emersonian sense, he discovers life, consciousness itself, in the barren scraps of a material world he crosses paths with.

Only that world isn’t so barren in Flaherty’s eyes, which imbue these spaces with currents of mood, atmosphere, whimsy, and disquieting consequentiality all in one in search for what could be called a Herzogian ecstatic truth rather than the so-called “Accountant’s Truth”. Although the film precedes artistic modernism, the state of the world around Nanook nonetheless engenders a quasi-modernist sense of myths shot through with fluidity and fragmentation, of truth as quicksand where subsistence to one dogma – fiction, documentary, adventure, comedy – is inapt to express the world’s mysteries. A century later, this cinematic adventurer with newness on the mind remains a quandary that doesn’t need to be reconciled, but rather reckoned with. The boundaries of documentary and fiction are porous and debatable here, a fruitful question to interrogate not in spite of but because of the very frustrations intrinsic to the viewer’s discomfort in thinning the membrane between documentary and fiction in the first place.