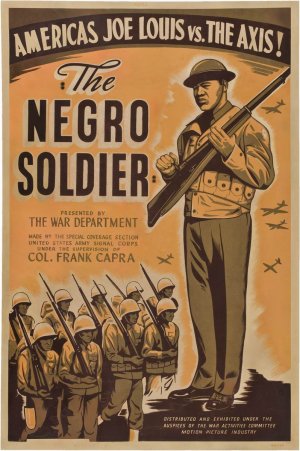 Defanging the shroud of mystical primitivism cast over African-Americans while also recasting black America as the spiritual center of American modernity, The Negro Soldier is simultaneously mildly hat-tip-able and deeply troubling in its propagandistic ideological concoction of egalitarian American opportunity for even the darkest and most neglected among us. Of the Frank Capra school of not-untroubled but always plausible American possibility, The Negro Soldier is one of the more documented “Why We Fight”-adjacent films even seventy years later, and also among the more inescapably despicable in its morally compromising sanding-over of racially-fraught American history in the name of the kind of hermetically-sealed war-time inclusiveness that only exists … well, it only exist in the motion pictures, as they say. This is the American road to freedom, with no pothole large or oppressive enough for Capra not to blanket over in warmth and saccharine sweetness (of course, a blanket isn’t going to stop you from falling into the American nightmare of racism if you get a little too close to reality for Capra’s comfort). One wonders what hell the devil John Huston would have wrought for one of his wartime propaganda films…

Written by Carlton Moss and directed by Stuart Heisler (but with Capra apparently heavily invested in the film’s production, to no surprise), The Negro Soldier is a sometimes mystifyingly elegant filmic construct matched to a faintly disgusting mystification of race relations in America. Opening in a neo-gothic cathedral and conscripting religion for its purposes, The Negro Soldier is actually rhetorically astute (which makes it all the more troubling) in its immediate awareness of the important role of the church as not only religious but social, economic, and political temple in the black American tradition. (After all, when society afforded you nowhere else to collectivize, the never-carefully-demarcated boundaries of religious and secular life don’t exactly hold much sway).

Structured around a church sermon where nearly every attendee stands and speaks their story of WWII, the surfeit of black voices in the film is also no mistake; the film wants not only black support but for whites to clue in to the fact that blacks are on their side (that old, perennially-reappearing pang of desire for black love in white society). And the cavalcade of black voices is carted out to oblige us white people that we’re in the right. Morally, the film scores a few points in daring to feign a genuine support for blacks with a sliver or two of social capital, namely lawyers, doctors, artists and the like (Aghast!). But it’s all in the name of eliding the tortured history of race in America, applying the rhetorical “black exceptionalism” card to cart out a handful of successful minorities as evidence that the non-successful ones, implicitly, simply aren’t doing their part. As history, then, The Negro Soldier hasn’t exactly read its Du Bois (in fact, we know it hasn’t, since the film explicitly quotes the racially conciliatory Booker T Washington, Du Bois’ primary bête noire during his early life, noting that Washington lifted black America “up from ignorance” in a rather grotesque rhetorical tactic).

Contrarily, if we’re to take the film at face aesthetic value, it’s a clear advancement on the already –concluded Why We Fight series, marshalling glorious mise-en-scene, canted angles, glowing cinematography, and provocative cross-fades and superimpositions all for the purposes of beautifully texturing in a crayon-scrawled thesis about opportunity in America. As disreputable as it is, the film’s visual acumen is hardly difficult to discern; particularly inspired is a simulacrum of Eisenstein’s intellectual montage to fabricate, through pure visual and sound synchrony, the argument that war is an implicit sibling of sport, performance, and competition.

Which is true, although not in the starry-eyed, supportive way the film suggests; the masculine success-impulse does infect both wartime and peacetime, and I suppose I should bow down to the film’s recognition of this fact, if for extremely dubious purposes. All in service of tracing the connections in conflict, work, and competition and exploring the contours and continuities of war and peace, the film stitches together the warfront and homefront social fabric as a showcase for virile men testing their morality on the field of  war that is conceptualized as a kind of combat-play similar to boxing. War then, becomes the rhetorical prick-waving contest spoken about by George Carlin; much like the adventure film of the ‘30s and ‘40s (and today), the social backdrop  of conflagration and oppression is merely a backdrop, a social theater for individual and collective American men to do what they do best and prove their morality via physical externalization. America’s iron-will is inextricably roped to its physical might.

Fittingly then, another wrinkle in the film’s politically-contingent and utilitarian admiration for America’s marginalized folk is its elevation of the black athlete to the pantheon of the gods, thus (ironically but unsurprisingly) showing that the film learned a thing or two from Leni Riefenstahl’s superior Triumph of the Will and Olympia (which is to say, circumstantial enemies are hardly unbonded when you scrape away the surface). When the fate of the nation is on the line, white Americans are happy to fawn over a masculine black body so long as that body is contained by a boxing ring (and white announcers calling their shots) or displaced across an ocean-safe distance in the Munich Olympics (with no American women to threaten). Single black athletes, as often the case in a white-normative society, are simultaneously afforded an abstract status as significantly less than fully realized, complicated human individuals while simultaneously being treated as more than mere individuals, representations of their entire race. (They are only to be individualized as real people when they are objectified as exceptions meant to suggest that the rest of black society, or the black collective mass, does not succeed; successful African-Americans achieve the  individuality that is rhetorically gifted to white people only by bettering their race, positioning themselves against and in competition with their blackness).

Still, the film knows how to make dark skin glisten, and as conscious propaganda, its argument is matched in its ideological disreputability only by its spirited rhetoric. Other rhetorical devices are no less stellar, from a shot of the unending, doom-caked march of the German army stamping out a prior frame in the film to clever associative editing limning a horizontal American battle cruiser out of a horizontal explosion of the same color, thus birthing mechanistic virility out of destruction (only to destroy again, in the eternal American cycle). As if tying American might to valiant destruction wasn’t enough, the film proposes, in one fell swoop, that the American military rises out of the ashes of desecration to prove that, in times of contest and pressure, our nation forms into a glistening mechanical piston of a diamond of world-conquering morality. Again, horrid, but you can see why audiences fell for it back then, and now for that matter. The Negro Soldier may not be conceptually thoughtful, but it certainly went to film school.

Score: 7/10 (although with films like this, the score had best be disregarded)