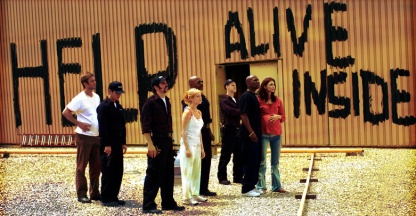 Zack Snyder has been spending way too long in the sun with the wrong king of edibles. Over a decade later, his brand of fast food cinema has woefully miscalculated its essential inessential-ness, replacing gleeful cinematic pit-stops of full-bore energy with lugubrious dogged trudges, buckets of lard pretending to be hearty, social-expose steaks. All these years later, he retains but one meaningfully good film to his name, and one that was more or less written off as trivial in its time period. But 2004’s Dawn of the Dead is only guilty by association to a superior film bearing its name, a stone-cold masterpiece that Snyder nonetheless fricassees in his hot-fire skillet of improbably sure-handed, slithering filmmaking.

So this is zombie fast food, but unlike say Dawn of Justice, it focuses on cooking the sinew and the trim meat right rather than on doctoring up undercooked meat with pretentious artisanal food foam that collapses once you take a look at it in the light. As a freestanding zombie picture, Dawn of the Dead doesn’t walk to its victories like it’s already earned them, enjoining itself to a victory lap. No, this film runs with the live-wire hunger of a work with orbs of reputation to juggle. Rather than buckling under the effort of having to juggle them, it decides instead to throw the weight by the wayside and, forgive the appropriately candid and vulgar language, show its own balls instead.

The “run” line is, of course, a rib against the fanboys in 2004 who misapprehended the nature of cinema by prematurely disemboweling this remake by accusing it of misremembering the essence of the original. Their evidence? That the new film replaces the slithering, molasses-slow saunter of the original zombies with the wild-fire-laced, hot-coal strut of zombies that hurtle toward you with the single-minded brutality of their own desire to eat. Point being: this is a hungry film, all neurons firing, whereas every other film Snyder has directed drowns (and I mean drowns) in a perdition of self-imposed meaning.

The old satire punch of the original film was etched most bluntly when the characters, ensconced in a mall as an obelisk of the commoditized hubris of American suburbia, asked why the zombies followed them there. What use could a zombie have for the beacon of modern Americana? Cunningly, the response to “why” was blunt and scorching in its ambivalence: “Memory, maybe instinct”, the zombies implicitly pinned to the zombie-like cadence of conformity found in their pre-zombified lives. But Snyder isn’t fazed or plagued by the need to sketch out the comparison. His zombies are murderous, unthinking pigs, and just as Romero’s zombies answered their old, human-bound instincts to shop, Snyder’s retain that other all-American instinct: eat.

It’s chicken scratch filmmaking compared to Romero’s satisfyingly full-throated slash-and-burn critique of redolent, commodified Americana, but it’s a well-furnished chicken-scratch. It seems to know that, by definition, it’s a film with the noose of its forebear around it, so it writhes and wriggles and spurts with ravenous energy to break out of its shackles. Snyder has been a minion of the Hollywood machine for quite a while, but only here did he embody even the slightest figment of that old proverb about the “beauty of the system”; this film’s mechanisms are pure corporate, but they’re oiled so tightly that it’s damn near irresistible.

Or bloodied so tightly, in this case, since Snyder primarily uses the “people in mall, zombies” situation to agitate the screen in the full-bodied innards of the world around him. Which include, despite what you might think, not only fleshy blood but resfreshingly anecdotal refrains to the inner juices of an America fraught with militaristic panic. A serrated opening credits of playful media appropriation projects a televised world covered round the clock by news that remains pitifully unable to accomplish anything other than fawn over destruction. This credits sequence also succeeds a positively vicious prelude with a woman being attacked by her husband and a young girl, a preamble that encapsulates all of the film’s teeth. The essence of the film is already right out there in those two sequences: we’re screwed now, and, you know what, maybe we already were.

Formal attributes outmaneuver the characters, naturally, but the flatness of the people (the aforementioned woman, and a collection of lost souls trapped in a mall) even feels purposeful, like reflections of humanity more or less unable to assert itself in an America where brutal survivalism is an ever-closing door. Rather than say an ever-ajar resting place for soliloquies and character moments, this Dawn thrives on people who are strikingly blunt, unmannered, and even, frankly, impersonal in the matter of actual human beings. Humanity, it seems, is a privilege in this world.

Still, the people are more sacrificial lambs than the focal points, fodder for Snyder’s imbroglio of strikingly tactile, fleshy combat and Matthew F Leonetti’s piercingly high-contrast color cinematography. Even if nothing else, as a barn-burning genre exercise in pure filmmaking, Snyder’s achievement roundly trounces action films of twice or three times this film’s budget (including all of Snyder’s subsequent vehicles). And, honestly, it’s not quite “even if nothing else” either. The film manages to push away the stomach and bilious spleen for comic intrusions (courtesy of writer James Gunn, now of Guardians of the Galaxy).

Take a mid-film montage, underscored by amusingly astringent music, where the characters indulge themselves in what little pleasures the mall affords only to burn out in a burst of liberated consumerist possibility undermined by sudden-onset boredom. After all, in a world where buying and purchasing don’t hold any pretense of purpose anymore, the capitalist-trained humans lose rhyme or reason for how to enjoy. We’re taught that something is nothing if you don’t have to pay for it, so what effervescence lies in a world where the everyone-for-themselves economics that girder America crumble before us? Without the ideological system it stands for, the mall erodes into an existential perdition.

Okay, maybe that’s a liberal application of my critical capacity to overreach. But other amusingly incongruous dialectics are stitched throughout the film with a lack of self-important meaning that suggests not broadness but a casual, lived-in manner to the drama. Look at the way Gunn and Snyder actualize an exhausted undercurrent of loneliness batting against the provisional desire to connect to whatever human souls still exist. The answer is non-existent, of course, and the refreshing texture of the piece limned from B-cinema frustrates our need for likeable characters who join together out of desire. This is cut-throat necessity here, with people’s lives suspended in mid-air by the zombies as they tenuously model the tempestuous, grubby action of democracy, Snyder’s camera shifting between perspectives with a blunt, pointedly ineloquent inability to settle on a definitive protagonist in a world without narrative or a center. This is Bush-era ennui and combative democracy, a society already in shards electrified to eruption by the newfound thresher of zombified remains.

Still, the real pleasures, and make no mistake, these are pleasures, are more flesh-ridden in nature. And the sleek hurtling of the zombies doesn’t gloss-coat the film in a plasticine sheen. The action retains its flubby, distressed humanism in stark contrast to Snyder’s later, more misguided exercises in superficial, plastic-like cinematographic beauty like 300. Cleanliness and godliness are well absent here, for the better; there’s a certain physically maladroit vibe to the combat – all people crashing of their own panic and their own flailing bodies – sorely absent in your run of the mill horror film, where character composure often remains untrammeled despite the machinations of a venomous world. In Dawn of the Dead, people are bumbling, fumbling masses of discontent and messy humanity in its physical as well as mental forms; sleek, premeditated planning is a privilege here, and this is a world running only on Diesel-fueled necessity. The action explodes without that pristine second coat of paint expected out of most blockbusters.

After the fall of the New Hollywood, the unstated rule was to force American auteurs who had overindulged (Coppola, Cimino) on adventurous enormity to pay penance by cycling into the cloaca of stylistically silent, safeguarded, small-scale American productions to appease the producers on a budget. The modern world inverts the shift. Now, whenever a filmmaker dives into some variant of classically mounted, relatively small-scale genre cinema, they’re forced into the haven of Blockbuster bigness so as to mutate and limit their skill. Hollywood conscripts them to direct tentpoles that double as open-air hideouts for people that Hollywood wants to contain. There are exceptions – here’s hoping that the space shenanigans picture Rian Johnson has been working up for 2017 is fine and all – but Snyder isn’t among them. Everything else he’s directed is a pox on his reputation, but at least they don’t turn Dawn into retroactive hack-work. Or well, this film was hack-work to begin with, but it hacks right into the enormity of the remake machine and kicks up all the dust it can.