Julia Leigh lowers the kinesis down to a zombie plod in Sleeping Beauty, a film that is pointedly not smitten with fertilizing or justifying anyone’s sexual intoxicants. Deeply analytical and fire-retardant, it is easily written off as a concrete slab of ice rather than a fibrous expression of vivid life. But there’s ice as an end point and ice as a beginning, and Leigh uses her tempered-down tone as a jumping off point for wider thematic questions. She doesn’t reject life for the sake of it in service of an empty exercise in nihilistic austerity. Instead, she applies her iciness as a way to navigate usually-carnal visual spaces and trap them, and to implicate audiences in a certain voyeurism (trite, I know) without turning the piece into a hedonistic, Hitchcockian riff on diabolical debauchery. Some of the ideas are wanting, but Leigh overcomes the relentless intellectualism of her work (and the film feels like work, make no mistake) by exploring her walking-dead aesthetic sensibilities with innately gifted craft.

Craft that is not only effective, but often revelatory. Leigh, a writer by day, rejects her stock-and-trade for a decidedly, even disarmingly, enticing visual formalism that relies almost exclusively on hard-and-stocky 90-degree angles and surreptitious cuts to introduce college student Lucy (Emily Browning) into the world of upper-class sexual abuse when she volunteers herself for a well-paying position as a temporarilly comatose sexual carcass for wealthy men to engage with (featuring anything up to, but not including, penetration). Lucy herself remains a cipher throughout the film, an object devoid of embodiment, allowing Leigh the benefit of a crystalline expression of the dehumanization of modern gender roles and their inscription within the ever-anonymous theater of capitalism. Browning’s body turns to enervated plastic in the frame, a pallid white substance devoid of essential meaning and endlessly pliable in a system that morphs human flesh into any object of its choosing.

Accuse Leigh’s formalism of merely replicating without countering that system and you’re on stable ground, but she isn’t without purpose in her deeply, almost destabilized stability and the near-frightful extent to  which she rejects the cinematic tendency to treat questions of identity and gender by turning up the proverbial exploitative heat, relying on the sensuality of the human body to construct films that are critiques of sexual control but innately reify the sexual gaze by utilizing it in the first place. Leigh’s vision, in stark contrast, is deeply, essentially desexualized. Obviously, it’s a matter of taste whether you prefer this, but the craft here is inimitable. Leigh’s film chooses to effectively embody and replicate a fatalistic, whitewashed modern world trimmed of emotional fluidity rather than to posit an alternative – which is, maybe, a cinematic equivalent of presenting a problem without a solution. But problems on their own are ripe for artistic potential – answers can be unnecessarily trivializing.

On its own terms, then, Sleeping Beauty is a fascinatingly solidified, brittle inverse-fable that borrows the generalized nature of fairy tales but sabotages their aesthetic by inducing a chilling torpor. Humanity is nothing but material in this film, devoid of the category of “subject” in its calibrated subservience to both society and judiciously-applied cinematic frames devoid of life. One senses a jaundiced detachment in Lucy before the film even begins, a disembowelment Leigh wisely chooses not to explore. In doing so, she visualizes the repressed emptiness of a person devoid of back story or sense. We are withheld throughout the film, a textbook aquarium-vision that doesn’t so much reflect a male gaze as the antiseptic machinations of modernity more broadly. The stillness of the piece invokes a certain contained malevolent sexual anti-energy that can be either Machiavellian or anemic depending upon the moment, which is ultimately enough to envision life-in-plaster even if it dips into-cinema-as-spreadsheet as well. Ultimately, though, Sleeping Beauty is so deadened it can’t but locate a perverse vision of life itself. 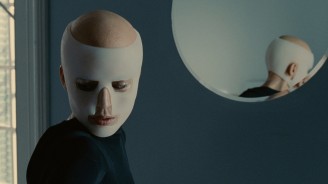 The Skin I Live In

An ode to classic French/ Spanish psychosexual horror cinema by the liveliest, most perverse graveyard scientist working in all of cinema today, Pedro Almodovar’s The Skin I Live In probably isn’t what would be called an ideal introduction to its director’s aesthetic, even as it somehow embodies much of what makes Almodovar himself. The frothy, sexually provocative running bull of a director from Spain who celebrates Spanish heritage, international cinema, and the women of the world with the prismatic, omnivorous eye of a great pop-art painter is also a ripe visionary who pays homage to and subverts so-called “lesser” fiction. Usually, this takes the form of screwball or melodrama (the once-regal-rulers of cinema now turned benighted reprobates). But Gothic horror, with all its malformed bodies and psychic doubles, isn’t exactly outside of his wheelhouse of torrid emotions lashing out in all their unmodulated, resplendent cinematic glory.

Thus, The Skin I Live In is a horror film, an obvious offspring of Georges Franju’s Eyes Without a Face, but that enigmatically gorgeous high-class film isn’t its only parent. Almodovar has never been reticent about his desire to engorge his films in a love of all cinema as an expression of joyous bubbling-over emotion, and this includes the unmentionable realms of the medium he so dearly loves (“respects” would be too detached a word for anything Almodovar). For The Skin I Live In, this “unmentionable realm” essentially incorporates not only the respectable Franju but decades of Z-grade exploitation that Almodovar very much finds possibility in, to say the least. Which is why he has taken it upon himself to turn necromancer and ressurrect the mad scientist film from its probably deserved grave.

His love has its limits, of course. For one, the director would rather rejoice in than truly transgress the hoary tale of Robert Ledgard (Antonio Banderas) – a mad scientist, of all things – and his increasingly demented quest to construct a fireproof psuedo-skin as a means to cope with the suicide of his wife and daughter stemming from a chain of events instigated by the hideous burning of the wife’s skin. Almodovar’s fascination with the mad scientist sub-genre certainly affords him an outlet for his near-masterful visual craft, although one would be remiss to not deduce the limited nature of a film that is more momentarily intoxicating than legitimately subversive. Much in the tradition of Almodovar exploring European cinema fluidly and with a commanding ductility, the director values the “moment” above all, and this film is positively replete with indelible images that threaten to collapse on the back of their beauty (I’ll carry the after-image of the oppressively-lined skin-tight suit Ledgard whips up with me for a good while). The glorious visuals, sexually implicating and intoxicating in equal measure, aren’t for naught, either, serving as a head-space for both Ledgard’s increasingly psychotic infatuation with surface beauty above all as well as a theoretical font for discussing the audience’s surface-level relationship with cinema.

A “theoretical font”, importantly, because something about The Skin I Live In is undeniably trapped in the liminal space between suggestive succession of valuable images and a more full-throated, cohesive, systemically constructed feature film. Which is to say that it plays better in the abstract as a commentary on the male gaze than a dense, fully-featured expression of this idea. The parade of rocks and hard places in the film – mirrors, doors, and all the other usual suspects – do their part to explore how we are all ensnared in surfaces as well as liberated by them. But they don’t also cohere into substance in a film that is mostly unsure of whether it wishes to slash-and-burn its director’s fetish for female flesh or celebrate his love of the feminine form (one suspects this film is Almodovar’s attempt to turn the latter into the former, but the more typically generous, surface-loving director’s usual self peeks through more than the film can thematically handle). A film devoid of any of Ledgard’s carefully-surgical incisions, The Skin I Live In is a glorious mess.

Still, Almodovar has expended decades of energy breathing life into his preferred medium, hashing out a distinct fascination with the Southern European and Mediterranean tradition of rampant communal cinema bubbling with darkly comic life. You have to give him credit for attempting to marry this hotheaded aesthetic to a screenplay that is both luridly grotty and ice-cold, producing a film that is never less than thoroughly torn between its higher and lower brow influences. Mostly, one suspects the director doesn’t especially concern himself with trivialities like cohesion, which is both for the better and the worse, resulting in a convoluted imbroglio of a film. Still, Almodovar’s aesthetic at its best (which is some of the time in The Skin I Live In) wields torrid theatrics and volatile kinesthetics as a lure for an invasion (and celebration) of the surfaces that bind us all. The Skin I Live In may be more intriguing experiment than anything else, but the film’s resistance to definition is a blessing even when it’s a curse.