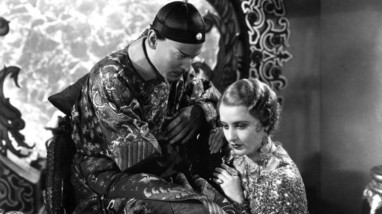 The Bitter Tea of General Yen

Arguments for Frank Capra as “Capra-corn” are redoubtably rebutted by his first Best Picture winner It Happened One Night, a work of fastidious detail and mercurial flickers of effervescent energy escaping from the pores of a socially constrained world. It is true that Capra predominantly favored individualist visions of human energy remaining untrammeled by the iron boot of society, but his brand of humanism was deceptively collective when it called for it – It Happened One Night is, at heart, a portrait of individual consciousnesses tapping into each others’ radiating energies for joy and refreshment in a dark world. Capra’s great secret was his unmitigated enthusiasm for and formal mastery of the free-floating, incandescent, nervous energy of the individual, a humanist ideal that only in its most reductive views (the views expressed by many of Capra’s later films) would suffocate itself on cloying Americana.

In their emotionally-attuned, ever-temporal editing rhythms and construction of the world as a fantasia of fluttering, uncontainable emotions vying for control on the screen, Capra’s earliest works remain his brightest, and perhaps his brightest film is also his darkest of them all: 1933’s The Bitter Tea of General Yen. Not unlike the work Murnau might have meddled in had his life not been so tragically cut short by an automobile accident, Capra’s film is the missing link between the sharded avant-garde expressionism of Weimar German cinema and the busy-bodied, kinetic portals of American life Capra would come to flourish with later in his career.

A Pre-Code seizure fraught with hysterics and a vision of indomitable individuals cast adrift in a maddened world, The Bitter Tea of General Yen is a deliciously kooky work even for its time. Reactionary orientalism in full-bloom and bracingly radical critique of anti-miscegenation. Soft-focus impressionist romanticism and full-throated, chiseled, rough-angled holocaust hovered over by Joseph Walker’s stunning chiaroscuro. Contradictions like these loom large over Capra’s beguiling tough-love fable of an interracial relationship in a nihilistic lost-love world.

The beauty of the affair between Megan Davis (Barbara Stanwyck) and the domineering General Yen (Nils Asther) is damaged today by the film’s unremitting insistence that its Far East world is cruel and unforgiving, and its denizens barbaric and bloodthirsty. It’s not excusable, of course, but by the standards of the time – by the standards of forty years later, even – Capra’s vision is recalcitrant to conventions of Western superiority in its irrepressibly nasty, curdled evocation of the foolhardy, racist West and the unremitting dastardliness of unblinking American Capitalism, embodied in a Walter Connolly performance as snidely as it is supple. It’s a cruel, animated film about whispers of human goodness engulfed by the essential evil of just about all of us – a far cry from Mr. Smith Goes to Washington, huh?

If anything looms over the film, then, it’s the freedom that was afforded American filmmakers like Capra in the Pre-Code era, when swooning glamour was replaced by a toxic, swirling decadence of virtuoso villainy and ghoulish human churlishness. Imagining Bitter Tea just one year later is unthinkable, with the primal, openly sexual, thrillingly human glares the two principles throw one another likely replaced by more demure gazes. The shadow-shrouded, fangs-drawn imagery, meanwhile, evokes both the oppressive malaria of a world clamped down on you and the vituperative brio of the human will to revolt against and renege on social convention. Finding undiluted cinematography like this in an American film a year or two later? Good luck.

Like the majority of silent cinema, it’s all played in a faintly visionary tone, like a snarling pantomime of human lust rather than the real McCoy. But seldom in cinema has the capricious tension between social and individual been formatively visualized with such gnarled mystique and throbbing human energy. A little of Capra’s suggestive whimsy winks its way into the picture too – the palace that forms the backdrop of much of the film would be more familiar to most audiences at the time as a kindred spirit of Hollywood’s “Grauman’s Chinese Theater” than as a brick-and-mortar Chinese abode, a tacit hint that this free-flying world is a fable of the celluloid, an imagined playground that plays by its own rules even as it remains trenchantly aware of the world outside it.

One of Altman’s most live-wire cinematic undertakings, perched somewhere in the wide whirlwind between the laconic screwball fairy tale of MASH and the deranged post-coital hallucination of McCabe & Mrs. Miller, Brewster McCloud is Robert Altman at his most screw-loose. Having won the world’s heart with his rabble-rousing MASH, this follow-up, a cantankerous menagerie of cavorting cinema, found Altman in a thoroughly unhinged and non-complacent mood. As Altman would do throughout his career, it plays a little like the mad ravings of a newly minted director testing his goodwill in the court of public appeal, threatening his directorial clout in the process.

As scruffy and scraggly as any Altman film, but not a work seeking the whiskers of wisdom, this ambidextrously anarchic vision of cinema doubles as a semi-parody of the very cinematic fable it represents (“a fictional construct doubling as a critique of a fictional construct” being the de facto Altman mode he was in the process of attuning to and molding even as early as his debut feature). Brewster also picks up where Altman’s prior film MASH left off: while that 1970 feature worked its way up to the tingling self-reflexive speed-freak exclamation of its conclusion (“Attention, Tonight’s movie has been MASH”), Brewster begins already in the middle of a high. The MGM logo – one of the most unassumingly obvious film icons in the world – fades up and, before we can process what’s been done to us, it sneakily whispers its own artifice by informing us that it’s forgotten its line.

The tale moves on to young Brewster (Bud Cort) and his demented, possibly malevolent quest to fly around the Houston Astrodome – his makeshift abode – on the back of a Seussian contraption he spends the better part of the film constructing. But, if the film moves on from the MGM logo, it doesn’t downtune itself by committing to the reality principle. With a self-proposed supercop hot on the potentially murderous Brewster’s tail and Sally Kellerman serving as the child’s ostensible guardian angel, Brewster McCloud is barrel-house, rollicking cinema in the same post-textual veneer as McCabe but delivered in an acid-tinged high diametrically opposed to McCabe’s live-wire low.

Echoes of Hollywood and European royalty abound with references as all-encompassing as La Strada and The Wizard of Oz, many of which admittedly invade the film more with their own gusto than because they enhance the thematic texture at all. But then, the texture of Brewster is Altman undressed, where gleeful insouciance and hedonism is a measure of mettle in and of itself (I haven’t even mentioned the interjected ejaculations of bird therapy, or the off-its-rocker depiction of sexual maturity the film envisions, or the fact that it’s all wrapped up in a sidewinding parody of Bullitt). With slapstick comedy undercut by a deceptively unworldly melancholy, Brewster is a countercultural carnival that proudly indulges in its own trapeze act tangents, moving with a sprightly incandescence between characters as it rejects the norms of individual-centric storytelling. In envisioning the early ’70s as a carousel of alienation, dislocation, and madcap frenzy, it forgoes the rules of the game for, well, The Rules of the Game.