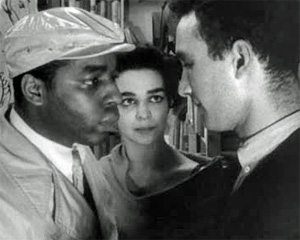 The unbecoming style of John Cassevetes’ devoutly rough-hewn social renegade Shadows belies its grandfatherly status as the giant upon which American independent cinema stands to this day. As freewheeling and robust as the film is, and as fringe-worthy as its style might seem, it’s perhaps ironic that the film has established its own tradition of dissonance and reckless anti-cinema in the hearts and minds of American beats and would-be enfant terribles for over fifty years past its initial release. Temptation begs to reduce it to has-been status, as if the film’s meaning was lost in its release and time has deluded its tempestuous critique of social norms and filmic image construction, as though its status as the head of a new order diminishes its rejection of the old order.

Yet Cassavetes’ genius was to pitch his films at the level of the unfinished and the provisional rather than the domineering or prepackaged, a technique that rejects the dustbins of history precisely because it is a cinema that is always aware of its own conditionality. It is perhaps one of the most humble films ever made, a work that is not only assured of its temporal nature but dependent on the realization that it can be improved on. Beat in the truest sense of the word, Cassavetes’ barrel-chested guerrilla filmmaking tale of three African-American men, two of whom are light-skinned, and one African-American woman, is a cinema of the illusory, a cinema of the moment rather than – as with almost every other film ever made – a cinema of moment-to-moment trudges.

Instead, Cassavetes concentrates on urges and pulses, of people and cities alike. His camera doesn’t observe the characters; it jokes with them, worries with them, dances around them, barrels right into their cores as it coarsely improvises new mechanisms of not only knowledge but knowing, not only new experiences but new modes of experiencing. Unlike, say, the hyper-literate free-form cinematic cut-up routine of Godard’s Breathless, which seems a provocative rejection of cinema as it existed before hand yet also seems entirely aware of what it wishes to impose in its stead, Shadows seems almost extra-cinematic in its druglike, cocaine-addled centrifuge of life on the fringes.

Probably because that life was Cassavetes’ life too, as well as, more importantly, the life of his actors Ben Carruthers, Lelia Goldoni, and Hugh Hurd, at least for the duration of filmmaking. Pigmenting their skin (the three occupied vastly differentiated racial identities by day, with Goldoni essentially white) the film itself evokes its own performative nature in the way it queasily centers the role-playing dynamics of race and external skin color in a world where some of the actors themselves were adopting roles to play the parts. Ruthlessly bleeding together performance art and lived experience, Cassavetes’ film acknowledges the cinematic tradition of blackface while applying a thick, viscous haze around the practice to contest the very notion of “the face” entirely. The film’s very existence is an act of racializing, or playing race, in a way no American film before or arguably since has been. It marinates race in the layers of its own constructedness; the film reminds that race is not an internal genetic code but an act of social image, a necessarily fluid, malleable, flexible conditionality.

A conditionality much like Cassavetes’ film, at that. The flexibility of the characters’ lived experiences, the awareness of fictionality and masking in their everyday life, is mirrored by a film that tacitly rejects our ability to truly know these individuals detached from the performance of socialization. Shot through with color-sapped cinematography that is less black and white than a rainbow of grays, the film itself does away with our understanding of experience and race, asking us to acknowledge the fluidity of skin that takes on a flexed, ductile color in the frame depending upon which greys, which figures, it exists around at the moment. Goldoni’s skin seems to transform before our eyes. Occupying Cassavetes’ interest in modalities of knowing or the opening up of the quest for knowledge rather than the period or end point of knowledge itself, the beat sensibility is manifested in the color of the film itself. It doesn’t answer our questions. It only provides us with new means of questioning.

Experientially, the coiled and cool blue Mingus music numbers and the twitchy, hop-scotching camera envision a cinema unleashed, a cinema on the ropes, so to speak, always exposing its own limits even as it gleefully skips past them with maddened fury and live-wire energy. Part improvisational film class, part experiment in filmmaking, the film rejects the status quo by threatening us with its instability. It’s as though the cinema is constructing its own questions in media res rather than, as any other film might, before an arduous process or scripting and storyboarding that, for Cassavetes, only confine and limit the mind. This is turbulent filmmaking without a net, a cinema where characters are always in the process of defining their identity and always in the middle of exploring our relationship to them, where scenes always feel like unknown, unfinished quantities capable of beginning before we expect them to or dropping out before they feel complete.

Most films, and in particular most American films, are conceited in their self-hoods and enshrined in their self-serving gratitude, works that posit rejections of society even as they deterministically arrive at their own contrariwise societies. In contrast, Shadows accepts the unknowable, almost eldritch terror of the fact that trying to escape from a social role is itself a role and a product of society. It accepts the tentative, the loosely-formed, the unresolved; it accepts its own inadequacy to know and searches for other means of knowing. If most American films are statements, Shadows is a question mark.