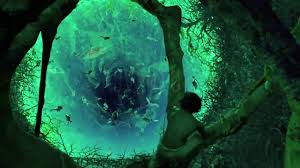 It takes a big movie to thrive with so many obvious flaws as Life of Pi, and it takes an even bigger director to get it to that point of success. For Life of Pi, that director is Ang Lee, the spiritually lush aesthetic artist who is as frequently benefited as he is hurt by his incomparably luminous romantic streak, and he does what is simultaneously his best and his worst job yet directing a film. His best, in that his spiritual streak is at its most alternately transcendent and restful in the large swaths of Life of Pi where it is putting all of its energy in being a purely presentation-focused work of feeling, breathing beauty and magisterially cinematic color-and-shape as mood-and-space. His worst, in that his spiritual streak leads him into some painfully cumbersome thematizing and immature and pandering feel-zones where characters drone on and on in alternately dulcet and exclamatory tones about petulant soul-searching and adolescent identity quests. Life of Pi, despite its restfulness, is a deeply temperamental film, moving between truly awe-inspiring nadirs of incompetence (such as a spellbindingly awful frame narrative) and acmes of blinding, truly side-winding transcendence that wash over you and put you in one of the finest pure mental spaces in 2010s cinema this side of The Tree of Life.

As a rule, although this is not binding, Life of Pi is a mesmerizing and hypnotic silent film struggling to break out of a much longer exercise in a particularly driveling and tedious exercise in sub-humanism. I have not read Yann Martel’s novel upon which the film is based, but if the text of the film is any indication of the novel, then I do not want to. The words “cloying” were invented for the useless and saccharine frame-narrative wrap around where author Yann Martel (Rafe Spall) interviews the adult Piscine Molitor “Pi” Patel (Irrfan Khan, as an adult) about his experience escaping a cruise-line catastrophe and his lengthy venture surviving aboard a small vessel with one of his family’s tigers, Richard Parker (the family owned a zoo and had been transporting the animals via sea).

Disgustingly cloying would be more apt, indulging in a totally leaden and uncharismatic trudge through hopeless and hokey philosophizing and truly trivializing dialogue. Useless philosophizing, as well, which culminates in a tear-worthy analysis of storytelling and trauma in the very final moments of the story that trade in a tacky ambiguity carted out to make something that is as simple as day seem falsely nuanced and ambivalent. Even worse, Lee films these sequences like a gross parade of talking heads.

Yet if the film’s modern-day material is antiseptic, it is only because Lee was tired after putting an ungodly amount of craft and majesty into the other lengthy portion of the film: the actual crash and ensuing journey across the waters of the soul, where a youthful Pi (Suraj Sharma) tries to survive the harsh and nebulous oceans of the Earth and of his mind. About which, words almost fail me. Lee is aided by cinematographer Claudio Miranda, who needs no further compliments but shall receive them here: Life of Pi is gorgeous. It is also, pointedly, not gorgeous in the way that other gorgeous films are merely enjoyable to look at. For a great length of time, Life of Pi is an ocean of reflections and images drifting around with each other, and Miranda makes these images as sweepingly omnipotent and as trenchantly intimate as any cinematographer could have, not only animating a flotilla of images but conjuring a truly refractory, reflective mental space.

Intimate, ultimately, to the service of Lee’s clear love for the material gushing over the screen. More than any mainstream film of the decade thus far, Pi feels like Lee airing out his connection to his higher spirits of choice and laying down awash in it (unless The Tree of Life qualifies as a mainstream film). Stills from the film evoke volumes, but although the film is proudly and profoundly bold and brash in its visuals, the look never feels ornamental. The hyper-saturated greens and blues calm with a certain hypnosis of elegant time and space, parsing out secrets about humanity as they exist in relation to the world and nature. And all with almost no dialogue, exhibiting an abiding and sentimental respect for the visual power of cinema to entrance and perplex and overpower, to bleed the physical and the mental. It isn’t quite Sunrise: A Song of Two Humans, but Lee has not before this done nearly as much to suggest his connection to the likes of Murnau and his compatriot children-in-a-toybox fable-makers of the 1920s.

All of which makes Life of Pi as fractured a film as the past few years have produced, moving from ludicrous lows to unimpeachable and almost unimaginable highs in the space of minutes. It is a deeply destabilizing film, perhaps just like the experiences of one Pi himself, but Lee is not a confident enough filmmaker throughout the course of his adaptation to trust his images on their own terms. As an experimental anti-narrative slice of pure moviemaking, parts of Life of Pi are wonders of the cinema, but it is almost as if (and probably true) that Lee was only granted the film’s budget if he agreed to literalize the themes of the film elsewhere in the story, reducing his images to silly symbolic referants to adolescent thematic antecedents.

To say something about it anyway: symbols are didactic and detached, lazy excuses for theme that hold back and exist for audiences to research on a computer. They move away from physical beauty in favor of simply placing objects and characters on screen, objects and characters not notable because of how they are framed or shot or presented in any artistic way but simply that they are on-screen in the first place. Images become empty vessels for “content,” notable not for their formal qualities but simply because they contain and document themes rather than commenting on or shaping those themes in meaningfully cinematic ways.  Life of Pi, at its best, is the opposite, grabbing you bodily and throwing you into itself with all the power of cinema. That the other portions of the film house such truly empty morsels of thought is dissapointing, but Lee’s film lives and dies based on whether his images are acquiescent to those themes or whether they animate possibilities beyond them. That terrible dialogue? Doesn’t help.