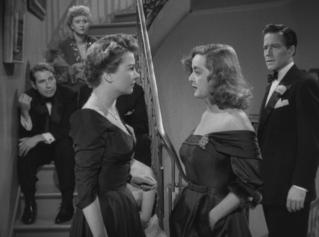 Everybody’s been talking about it lately, but the Academy is on a nervous show-biz kick recently, with The Artist, Argo, and most recently Birdman winning Best Picture awards in a new glut of the much vaunted “films about films” genre (even if, in Birdman, as it is in many other works, film is only ever sub-textual). Shockingly, you really have to go back sixty five years for another film about the art of stagecraft to win a Best Picture award, and since nearly every review of Birdman has compared it to a certain self-hating implosion from Joseph L. Mankiewicz, I figured Birdman’s award last Sunday is as deserving a reason as any to actually edit and post the review of All About Eve I wrote sometime around like last August (I was busy in the ensuing half year, it turns out). Enjoy!

When it comes to performances, it really doesn’t get any better than Bette Davis’ Margo Channing. She captures every conflicting facet of a marvelously convoluted character: bitter anger, a desperate joy in bringing harm to others, brittle loneliness, an existential masquerade locked under a thick, tetanus-infested mesh of coiled barbs and white-hot superiority, a sadness about a world that has spit her up and thrown her out. When All About Eve is discussed, the conversation naturally shifts to Davis, and certainly, she deserves it; she draws eyes like the fires of hell target moths. But what’s lost in this conversation around Davis is no less substantial: the vicious, all-fangs screenplay surrounding her, and the tight, snug filmmaking that crawls around it and locks it into a vise that squeezes every ounce of spiritedly, tirelessly mean complication and viciousness out of one of the greatest screenplays ever written for cinema and lays it barren right on the screen. 1950 was Hollywood’s self-hating year, and no filmic attack dog bore greater, more lustful fangs than Joseph Mankiewicz’s absolutely undying All About Eve.

Margo Channing is living large. Of all Broadway’s stars, her’s shines brightest. She’s critically respected, famous, and wealthy, but she feels eternally small in a world that lives and dies on the tension between needing to pursue greater success like a rabid dog and the crushing realization that nothing is ever enough. This isn’t Norma Desmond – Margo is all too aware of the cutthroat nature of audience politics and how quickly the industry can leave someone out to dry. She’s not deluded nor distant nor encased in her own waxy visage. But just because she’s cripplingly aware of the stake-filled pit around her doesn’t make her a holier-than-thou ironic type, especially not when her biggest threat turns out to be herself. And by herself, I’m referring, of course, to Eve (Anne Baxter), a young rising starlet who Margo suddenly finds trying to supplant her identity, something she is not about ready to give up without a fight. And graced with the lioness’ share of Mankiewicz’s cut-throat dialogue and tangible barbs, words cut deeper than any flesh wound for a woman who found fame wielding them like daggers. They cut through the sickening grammar, scrape away the glamour, and reveal the human hollowness underneath.

While Eve is looking to imitate Margo, she’s also the chopping block upon which Margo can define her own desire to stay in power. It gives her a challenge, a representation of the outside world to focus her ruthless cunning upon like a laser beam; it gives her temporary meaning, for without her, Margo is left fending off the world with cutting words to bare her soul wide open. However sharp, however angry her words are, they can only handle the crushing weight of the world for so long, leaving Margo torn and lashing out in all directions, at everyone, and eventually doing the only thing someone in her position can: recede into the shell that has elevated her so far into the limelight, her beacon of light now a prison turned inward. Eve’s presence is the jumping off point for a commentary on Margo’s own identity, insofar as it recasts Margo as a public persona, a construct, the kind which can be imitated, rather than a living, breathing human. It exposes the image in her mind’s eye. At the end of the day, Margo sees Eve as a falsity, an imitation of others, because it exposes her own falsity. If Eve can masquerade as Margo so easily, what is Margo’s life, and what is the world she inhabits but a waxwork’s show?

Mankiewicz’s script spares no one, but the crimson clash of titans with blood spilled on egos far and wide doesn’t hate. His characters are bitter grotesques and monstrosities of society’s making, but they are victims as well. Margo is not a villain, nor even an anti-hero, but a lost soul in a perpetual drowning motion, a victim of society turned into its agent of destruction. Mankiewicz doesn’t sympathize with his characters, but he undoubtedly empathizes with them in their prismatic, energetic, vigorous girth of cruelty as expressions of how little they have left other than cruelty, and how the entertainment industry (and modern society) has taught them to survive and thrive only through cruelty by stripping anything else of meaning from their lives. Performers live a life of artifice, and Mankiewicz sees the cost running all the way down to their (no longer existent) cores.

If this sounds like the description for a certain particularly noirish genre of film, well that’s because All About Eve owes almost as much to film noir as fellow class of ’50 Hollywood-hating classics Sunset Blvd and In a Lonely Place. Obviously, the rampant amoral qualities and brow-beaten branding where characters are given an opportunity to descend to the lowest rungs of humanity and not one single character fails to rise to the occasion. The crisp, harsh, process-oriented story that finds luxurious excitement in the lubricating brashness of humanity at its most elemental and attack-prone wastes not a single ounce of energy doing anything other than what it does best: dropping characters in a viper’s nest, forcing them to fend for themselves, and exposing the hopeless conditions of modernity with unsurpassed nihilism (for those who find this brand of nihilism overly cynical…you’re right, but that’s almost besides the point when it’s executed so well here). All About Eve unfolds like the most entertaining nightmare Hollywood left dripping down the bed sheets, hoping to forget about it in a caustic rush out the door on the way to another meaningless day.

All of this, and I still haven’t gotten to All About Eve’s greatest achievement: that it succeeds brilliantly in spite of sort-of-not-being-much-of-a-film. So much of Eve ought to just be a stage-play (book seems the obvious choice, but its effectiveness is attached too comfortably to the breathless, oily rush of dialogue-delivery from the cast and the breakneck timing of the scrappy exchanges composed like a particularly vindictive opera). It’s no secret that Mankiewicz, his talents as a writer aside, really wasn’t much of a visionary behind the director’s chair. Let’s call him a journeyman director, but no auteur. He sure knows how to use continuity editing like an old-pro to lay the essentials out in a precise, efficient manner so that Maniewicz’s pen hand can excel on the back of his painter-hand’s understanding of the bare essentials. There’s not a whole lot of visual storytelling going on here (the back stages where the film skulks have a sturdy post-Casablanca limbo-by-way-of-artificial-architecture vibe, at least). But what Mankiewicz is good at, he’s so tremendously, instinctively good at that there really isn’t anything else to be said.

All About Eve has been endlessly compared to its better half, Sunset Blvd, and if the comparison leaves Eve slightly flustered, this too misses the point (it’s not like I can criticize a film for being less good than my favorite film, after all). It lacks Sunset’s loosening of the divide between the public and the private, its deathless character interplay where hate, love, desire, repugnance, shunning, and want become one and the same, and its sublime visual splendor that captures Hollywood as exactly the artificial, noirish location its proponents inhabit in their minds and distill on the screen at the expense of their souls. It’s just not elevated to another plane like the way Gloria Swanson and William Holden lost themselves in a mythic melancholy of Hollywood’s own making. But on a more immediate, even primal level, Eve is a masterpiece in its own way. It’s less a dissection than a clipped, combative cage match, and that works just swimmingly. While Blvd is a slithering sidewinder wearing its opponent down over time, ending on the most earth-shattering, constricting hit possible, All About Eve is feisty, going in quick for a knock-out and refusing to back down from the first moments.

Given the choice, I’d go for the way Blvd inhabits its characters’ monomaniacal loss on its sleeves and brings the house down at the end, in true Norma Desmond style. She, at least, had vivacity to go with her preening and posturing. But All About Eve’s preening and posturing is so grin-inducing, so unspoiled, so voluptuous, and so full it doesn’t really matter; it’s a close second to Billy Wilder’s masterpiece in a hell of a race, and the fact that a film can even compete with Blvd makes it a surefire entropic classic in its own right.