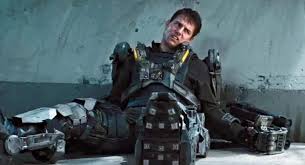 Edge of Tomorrow is made of parts increasingly rare these days in the world of summer blockbusters, the most notable surface level rarity being that it ostensibly does not put on the cap of a franchise player. It’s one-and-done (and not only because it failed at the box office), aiming to get in, tell its story, knock a few heads, and slip back out again by the skin of its teeth. There are no grand gestures for future films, no lingering threads. It’s a work remarkably free of ego, a piece cut and chopped to hit and hit hard, and a film that knows when it has out-stayed its welcome. Although it’s not perfect, it rides its remarkably confident, self-contained ambitions pretty damn far. If it gets off a tad bit too late and doesn’t much go anywhere particularly sublime, the ride has such whiplash energy while it lasts, it’s hard to mind. Edge of Tomorrow is not a great film, but it’s a great blockbuster, and the increasingly middling, strained world 2010s summer fare can always use a few of those.

I won’t go into much depth on the plot, for the material doesn’t beg it and it’s best left off the table. The de facto Groundhog Day meets Aliens claim, and all the assumed “guy restarts everyday but it’s an alien invasion” plot points one assumes center the film very much do center it, with Tom Cruise out and about trying to figure out how to stop said invasion through the only real means he has: dying hundreds of times. Which brings me to the second assumed center of the film, the Cruise man himself …who is totally fine and good in the way he usually always is. It’s a little trite to comment on Cruise’s ever-growing list of failed action prospects, how each non-Mission Impossible film he graces with his non-symmetric presence struggles to pass muster at the box office, even when it’s a solid all-around effort as a film. Edge of Tomorrow didn’t change that, I suspect for the same reason none of his films have – people are more interested in star personalities than acting talent, and Cruise’s personality has, for good or bad, put more than a few people off over the past decade or so. I won’t legitimize the complaints – especially because Cruise is his usual dependable self here, and because, you know, being a Scientologist isn’t a mark of poor talent, as much as everyone seems to want it to be.

At the end of the day, neither the plot nor Cruise define Edge of Tomorrow; its blunt, traumatically-successful craftsmanship does. Certainly, the opening quarter of the film (and especially the stunningly matter-of-fact opening conversation) is a masterclass in efficiency and terse editing, the bare minimum amount of time it could possibly take to thrust us into the story. The film is remarkably spare in an age of indulgent blockbusters (that it is less than two hours long is one immediate saving grace) – it never gets caught down a blind alley of sub-plot or tangent that is not wholly and completely necessary for the film to continue on. Its treatment of its two central characters, as well as its central conflict, are remarkably free of exposition and dialogue intended for the audience. Everything is conveyed implicitly, through subtle, little gestures and moments that require a visual connection to the film but do not insist on themselves in the way other portentous blockbusters might.

For instance, we learn essentially nothing of either main character’s back-story, for such back-story is inessential to a piece that intentionally treats these characters more like meat-bags than anything else (incidentally, the work it does to make Cruise come off a rather self-important, elitist sort is rather commendable on this front too, especially because we have no real reason to sympathize with him outside of the primal simplicity of how plainly hellish his situation is). And the pained emotional connection that develops between the two main characters as they confront death hundreds of times over (although at least one of them by definition can develop no real connection to the other) is never explicitly focused on. Instead, it’s conveyed through implicit details around the edges of the film that really pay-off for those who approach film as a holistic medium and bother to pay attention to the little corners of the screen.

Focusing not on their back-stories but the immediacy of their situation in the present is also a remarkably confident gesture. It has the effect of making the story seem smaller and more personal than it really is, sparing us scene after scene of “here is the state of the world newscasts” and keeping it trained on Cruise with an eerie immediacy that pointedly sacrifices false grandeur. If anything, it has the down-and-dirty set-to-kill direct and small touch of another Cruise vs. aliens (or Cruise runs from aliens) blockbuster from the ancient world of 2005, the criminally underrated War of the Worlds. Like that heat-of-the-moment film, Edge of Tomorrow is not a great story, but it is great storytelling, something much rarer these days.

Even better, the film manages to derive gallows humor not through dialogue, like just about every other funny American film in existence, but through editing and camera movement. The bone-crunching sound design certainly helps plenty, but the real comedy is found in the way that director Doug Liman and his editor know just when to cut after Cruise dies to maximize the impact. Usually they cut immediately afterward, so that it registers more subliminally and gives the tension no air to breathe, but the few times they decide to linger on a sound that tells us that Cruise, off-screen, has met a grisly end are among the most naughtily delightful bits in cinema in 2014.

In the end, Edge of Tomorrow doesn’t quite hold together under its ambitions, the last third devolving into fairly standard, if well-made, action movie formula without any distinguishing features. But it’s never less than decent, and that first third, bordering on half, is tremendously satisfying. It uses its concept in the least gimmicky way possible, insofar as it treats it as a means of defining its storytelling and its characters. And it never devolves into Christopher Nolan style expository histrionics about the state of the world or the human mind. It treats its time-loop cred with care but never gets lost under the need to carefully defend, legitimize, or make sense of its science-fiction premise, or to get lost in its own thoughts. It simply rolls with it, moving forward at a terrific clip and making sure, if the science is a wash, the fiction is able to mask it.

Ultimately, there’s not much going on under the hood – it’s a wholly broad-minded, superficial film with little in the way of consequence or soul. But then it doesn’t want to be anything more than broad-minded – it is simply a nifty formula film that plays around with formula and has a fun time being the superficial beast that it is, something exceedingly well-constructed for the purposes of pure popcorn munching. It’s a thoughtful film, more than anything, but its thought is completely siphoned into the production of something that is breezy and surface-level. The whole thing is a proper pile of fun, in the way that olden action movies derived fun through editing and mise-en-scene and production design. It does that style of action filmmaking – all nuts-and-bolts craft on the surface and completely eschewing any need to be “deep” – proud.