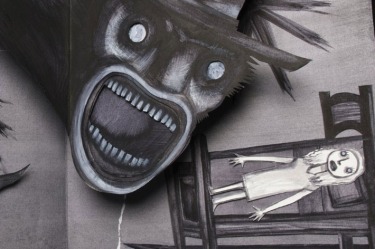 I apologize for the temporary absence of the weekly Midnight Screening from this blog for the better part of the month of November. I was too busy elsewhere and found myself too distracted with other reviews. I justified it to myself by reminding myself I had published three full length reviews instead of the usual one for the final week of October, but, seeing as I didn’t tell you all playing at home about this, that’s not an excuse. I’ll try to be better about staying consistent and giving a heads-up when things are to change. On the positive side, I can’t think of a better film to re-start the series with than this week’s entry. Consider it an apology. Enjoy.

There’s no point in sugar-coating it, for neither does The Babadook: Jennifer Kent’s debut as a writer-director is the scariest movie I’ve seen in a long time. It does a lot more mind you, giving audiences a surprisingly nuanced characterization of familial abuse and that particularly human will to self-destruct, but that’s merely the icing on the cake meant to send critics into over-drive with claims of textual nuance and subversive social commentary. One can write or talk forever about what makes The Babadook scary or what it says about the human condition, but the core, expressed with a terse worry, boils down to one thing: it is cavernously frightening, and frightening and horror are two bosom buddies that have been in some sort of spout in recent years. They’ve lost their way, and Jennifer Kent is here to reconnect them.

Amelia (Essie Davis) and Samuel (Noah Wiseman) get by, but it’s often more difficult than even they can imagine. Amelia’s husband Oskar, also Samuel’s father, was slain in a car accident while transporting Amelia to the hospital to deliver Samuel seven years ago. They survive, but day-to-day living begets a certain emptiness they can’t quell. Then one day Amelia finds a children’s book laying about her house she doesn’t remember acquiring and reads it to Samuel for comfort. Only comfort is the last thing it brings. Hewn together with broad flatness and black-and-white drawings anyone with a devilish sense of imagination could have constructed, it’s a particularly nasty sort right from the get-go. Entitled “The Babadook”, it tells of a bogeyman who comes a knocking “ba ba Dook Dook Dook” and then proceeds to have his way with you. The book is right out of German Expressionism, and Amelia quickly realizes it is maybe not the best thing to read to your seven year old child, a suspicion proven when Samuel becomes obsessed with the creature to the point of, seemingly, losing his sanity to the monster.

The set-up has a nice in-the-moment quality, lean and efficient but filled with little details that populate the minds of these characters. Of course, if it is efficient, the film is nearly half over before anything even vaguely supernatural happens. It’s anything but slow though – the family drama that ensues is as angular, tense, and downright maddening as any you’ll find this year. To this extent, The Babadook is receiving critical accolades more for thematic subtext (that amorphous, ever-present critical “thing”) than its curdling viscera. The film is awash with is-it-or-isn’t-it visual metaphors about the nature of the Babadook as a bestial reflection of childhood id, or motherly woe. Meanwhile, there’s a rather stunning character shift that centers the film, taking us down one path and then subverting our voice for the film in a way that feels profoundly earned. It does more than chill; it distorts our senses and implicates us in the horror by constructing and galvanizing our presuppositions about the genre (and how creepy children are often made to be within) and then positively shredding them in a deft shift that is less unreliable-narrator and more narrator-undone. Kent realizes who we will support, and visually favors this interpretation. Until she doesn’t anymore, and then things get most interesting. It should be obvious, and it is on a conceptual level. But Kent’s skill behind the camera, and her commitment to feeding us unease by the jarful, is too primal and fierce for it to seem trite.

All of this considered, there’s a good deal of thoughtful commentary on abusive relationships and self-fulfilling, mutually-assured familial chaos here, with a mother and son at each other’s throats and struggling to their last breath to love each other in a way that proves more tiring than heart-warming. It’s a very mature film, in other words, a horror of identifiable class and insight toward human relations the likes of which we haven’t seen done with such skill since the 70’s. It’s haunting, worrying, deeply felt stuff, the kind of expressively uncomfortable, and actively discomforting, verboten material that’s as difficult to sit through as it is so piercingly well presented we can’t turn away.

But I’ve said before, and I’ll say it again: theme is well and good, but it’s for naught (or for much less) if the film around it is poorly constructed. It’s so thankful then that The Babadook is exceedingly well constructed at a bare-bones level. First we have the dreary, lived-in mise-en-scene which gives us a sense of mundane reality the film quickly gets to work invading and eventually shattering. In particular, the children’s book that signals the Babadook’s arrival is just about the scariest thing I’ve seen in a film in ages, with a blood-red cover that implies a fleshy creation and pierces the brown, gray, earthen tones of the film’s drained reality. The inside, all charcoal blacks and white, is even worse. Then there’s the sound, the ever-underappreciated backbone of horror, which is set to kill; the angular warbles, demented howls, and wonderfully present everyday sounds rendered so punishing it hurts are undeniably the film’s best feature. And the Babadook himself, a wonderfully amorphous pale shriek of a figure who exists to frighten. If horror is derived first and foremost through images and sounds that create unease, The Babadook is the best combination of those two features for that one purpose in a long, long time.

The Babadook is, in short, a beguiling film that is wholly, bone-chillingly effective with a well of material that should have been long dry by now. Horror as an explicit manifestation of human trauma is old hat, but it’s been many years (perhaps since The Descent) since a film has explored similar material as effectively. Good horror movies in recent years have often been accompanied by heavy strains of irony and camp, but The Babadook is something much more direct and unsettling: completely straight-faced. It’s proud that it’s out to scare and doesn’t want to dilute it with anything that could muddy the waters. Jennifer Kent looks to have a promising career ahead of her, horror genre or not. For the sake of a good scare, I hope she stays true to her roots.