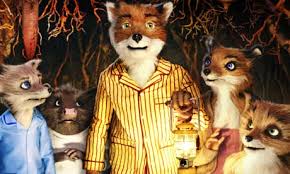 Despite Wes Anderson’s near-murderous commitment to the merriment of exchanging trifling fables for narratives, it’s no secret he was in dire-straits as the back-half of the first decade of the 21stcentury rounded its way toward conclusion. One of the indie darlings of the mid-’90s, Anderson’s films had been on the path to antiseptic stagnancy even when he reached his early career peak with 2001’s The Royal Tenenbaums. While that film perfected his particular brand of formalism, it also glimpsed the shift from childlike wonderment and a freeing love of reigned-in chaos to a more rationalized, and thus less free-flowing, rigid arch-detachment, a cloying style which would for a few films become the bane of Anderson’s existence. Throughout the mid-2000s, Anderson’s art-house meets doll-house sensibility threatened to strangle itself with its stifling, dictatorial commitment to precision and professionalism over feeling and energy. Something had to happen.

It turned out that something was the blessing of an animated film, an adaptation of Roald Dahl’s story Fantastic Mr. Fox. Since his films were rather resolutely childlike and drowned in their own imagery to begin with, animation always seemed like the perfect refuge for an ailing Anderson. He’d made his point about his own formalism in a live-action feature, a point that was subversive way back in the distant world of the late ’90s, and he had bludgeoned it to death since then.  The freeing medicine of something more openly falsified – like, say, a children’s picture book – could, if not necessarily broadening Anderson’s palette, at least remove some of the boredom of seeing him rely on the fussy quasi-non-reality he had committed to so to long. At the least, in an animated film, he could go full bore with non-reality.

As it ended up, Fantastic Mr. Fox did a whole lot more than that, playing like a classic storybook given a fresh new coat of paint and being told by a hot new performer. That Anderson, whose stylings went from childlike to stodgy 18th century arch-perfectionism long ago, could be referred to as “new” tells you all you should need to know. The look of the film is exactly the open-faced diorama we might expect from a man whose films had become waxworks. Yet while we’re busy expecting a museum piece here, he gives us something much less formal that actually captures the boundless, unfinished energy and dreams of a child. That the world of Mr. Fox and friends, in fact, is painted in broad strokes and leaves us to fill in the little details is rather non-Andersonian. This is him letting his hair down and having a little fun for once, not caring that there are spaces he’s left blank and not obsessively needing to go back and cover them up.

The actual animation, meanwhile, follows suit with the film’s energetic glee. Anderson’s jerky, unfinished character movement doesn’t attempt to capture animals as they really live but as a child might capture them. If it knows a sibling in professional animation, it’s the kitschy, high-imagination and low-budget pop-art work that flourished sometime in the late 1960s and went away with the rise of the clean, professional commercial entertainment that strangled the 1980s. These pieces were all basic colors splashed over simple, scratchy lines populating abstract backgrounds – the kind of work a five-year-old auteur might make if let loose with crayons and just the slightest sliver of a sense of human form. Anderson’s film has more detail  and fussy craft backing it, naturally, but the spirit is there nonetheless and the whole just feels freer and more spontaneous because of it.

At the same time, the look of the characters in this film is almost pained in its realism, and the effect of this matched with their distinctly unreal movements borders on watching taxidermy animals held up by puppet strings in a stage-show. And stage applies quite literally. The sets make no bones about their hand-crafted nature –  Anderson was clearly proud of his productions and wanted to show them off like a kid on an elementary school project, letting us know that he made it every step of the way. It’s as amusing as it is uneasy to see  arch-realism melded to janky animation melded to stagecraft fakery, but either way it’s the polar opposite of Anderson’s increasingly sanded-down, crystal clear precision. It has an almost guerrilla sense to it, giving us characters who appear pointedly amateurish and simultaneously maintaining and subverting Anderson’s presentational filmmaking.

But when so much is notable about the animation in a vacuum, it’s easy to overlook the melding of animation to story. More than anything, Anderson has found the slight, barely-there fable-like tall tale of a campfire story he’s always needed. Without going into much detail, it’s about a fox (a delightfully dead pan George Clooney) and an identity crisis. Specifically, he’s uneasily torn between middle-class tepidness and working-fox verve, and along with his son he tests out the later by doing what foxes do best: catching chickens. Like all Wes Anderson films, it deals with adult themes in childlike ways, but here it has a broad appeal and a fittingly surface-level pizzaz that makes it seem less like forced immaturity and more like natural whimsy. Above all, it’s genuinely funny, with sardonic, unforced, low-key humor anchoring a gleeful whistle of a film. That, above all, is the sense of scrappy reckless abandon Anderson has always needed to temper his often stodgy, intellectual perfectionism, and he finally achieves it here.