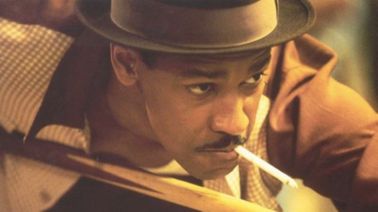 First, a note: If not for plot synopses, I might write twice as many film reviews. A synopsis is that desperate time when I have to actually remember (!) what I just saw in narrative terms and commit violence upon my mental understanding of visual storytelling by reducing it to words on paper (well, internet paper) about the “plot” of a film. I have to pretend as though a paragraph explanation of the “event” of a film is an accurate description of what can make a film good or bad. It is no secret that I am a firm believer that just about any plot description can amount to a terrible film as much as a great one, and that it is the storytelling and not the “plot” that a story makes. So this causes me great dysfunction.

With that out of the way, a follow-up review!

For valuing plot above all else, film noir is often the worst offender. It is a genre all about its narrative twists and turns, and a genre often misunderstood when reduced to such. A film noir often tries to earn its stripes based on the inability of even the most trained followers to explain what they just saw; it’s a badge of honor for it to have a complicated, even contrived plot. Too often, however, all this praise about twists and turns forgets that other narrative factor, the one which justifies the very notion of a quest to twist and turn and confuse: depth. Depth leads to twists of a far more subversive, subtle variety, nuance which comes not from more narrative “event” but from the implication of “event”, be it visual or conceptual. A good film can probably get by on the former, a preponderance of “event”, but a great one requires something more.

Devil in a Blue Dress fails the conventional film noir test for complicated narrative – the story, of an out of work black male in 1940s LA looking for something, anything, to continue to pay his mortgage and ultimately taking a job to locate a local white female, is standard noir fare with little in the way of  overt narrative breadth. In its place, however, the film emphases something far more dangerous and scary: true depth. If the film boasts little in the way of event, what events do occur are given texture and import – they mean much more, and they’re worth digging into.

Much has been written about race as the unstated in noir film, with blackness as the representation of the dark “other” which implicitly drives the white character’s descent into the criminal world. Devil in a Blue Dress is one of the few films to bring race out of the unconscious and into the forefront. The film’s main character, Easy Rawlins (Denzel Washington) is black, and we’re made painfully aware throughout the film how what would otherwise be a typical noir film is subsumed by the rhetoric of race. LA in the ’40s is a place where, above all, African-Americans were used and abused by whites; any white person who nominally accepts or supports Easy is revealed to have ulterior motives. Even when they do genuinely like him, there is an added expectation that they are owed something by him for their racial liberalism.

Devil in a Blue Dress deals with race within the trappings of the genre, which is to say it’s hardly a heartbreaking depiction of reality, but it pays more than lip-service to the ways in which Easy’s race allows him to remain noticed and unnoticed as he goes about his business. It also addresses the issue of racial passing, and the way a nominally white person is also subject to maintaining their racial identity and can be victimized by the potentiality that they will be discovered to be non-white. If this film lacks twists or turns, it strides by them with all the confidence of a swaggering detective – it doesn’t need them.

Ultimately, race is the story of this film; it is a tale of subtext bubbling up into the text. It’s not its plot, per-se, which involves Easy getting tangled up in all manner of shifty business regarding the male quest to define themselves through the possession of women (thankfully, the film slashes into the misogynist femme fatale trope by rendering it’s “devil in a blue dress” a victim of the intersectionality between gender and race discrimination). I could go into more detail, but it would be futile – story, not plot, drives film, and this is very much the story of America during the mid-twentieth century, but also today. It’s the story, in a nutshell, of an African-American man searching for agency under the system of private property America defines as key to social worth (all Easy wants is money to pay for his house, after all), only to find out that his quest is little more than a one-way ticket to abuse by a white America only interested in his property insofar as it can be leveraged for controlling him. All noirs play out the same way on paper – it’s the details of the filmmaking and the nuance of the narrative that transform plot into story, and Devil in a Blue Dress is a noir of great nuance when it comes to the subject of race.

It certainly doesn’t hurt, though, that the film is no slouch when it comes to the “details of the filmmaking”. Depth and nuance is good and all, but no one’s complaining about a sense of style for the vehicle that delivers them. To this extent, journeyman director Carl Franklin directs the film like a product of the seedy underbelly it takes place in, infusing the environment with smoky details, emphasizing shadow, and playing around with shot structure to disconcert us. When he depicts characters driving, unlike most films, he doesn’t show us the front seat with the camera positioned on the front of the car; he gives us the character’s perspective as they weave in and out of the roads, rattling us with literal twists and turns to rival Easy’s disjointed perspective on the world.

The film’s conclusion, for all the melancholy that followed before, is bittersweet. It’s also a stinging indictment of the film’s white characters for using Easy for their own purposes. What occurs toward the end is heartbreaking, but as soon as Easy bounces back to his own predominantly black community, he comes to realize that the true “darkness”, despite what society wanted him to think, was in the system of oppression around him. While he monetarily profited from his ordeal, Easy realizes it was at the expense of the community he could grow to love. Many noir characters are loners, and this film openly addresses how the loner Easy – not willing to take a stand on race due to his interest only in his own personal possessions and his self as an individual –  comes to fit in with the whites around him. But he can’t truly fit in –  for his desire to strive under their cynical, individualist, materialist worldview, to be their noir hero, their detective, he receives nothing but abuse.

Easy ends the film with food for thought, a narration that not only advances the plot, but for once, advances character. He’s been through a lot. And we the (predominantly white) audience probably want him to go through much more. We want him to star in more detective stories for our amusement, to legitimize our desire to have him try to fit into white society and to be yet another in a long line of stoic, individualist, brooding, detectives popular in the American lexicon.

Here, however, he speaks not only to the film’s characters, but in an act of concluding narration – that is a distinct act of speaking to the “audience” – to us. After fighting to be an individual around whites who feign color-blindness but truly see him only for his blackness, Easy chooses to be part of the black community. He refuses not only to do the dirty work of the film’s white characters, but to be the audience’s knight in shining armor ushering the noir type and its Americana history into the future. He refuses to be our individualist black hero who denies his blackness so that he can fit into our “color-blind” filmic dream world where race is no issue. He refuses to be our black private dick. Like all film noir, Devil in a Blue Dress is less a reality than a dream rendered as a nightmare. But here it’s the American Dream, and Easy is only just waking up. At least, as he points out, he’s finally happy to do so.