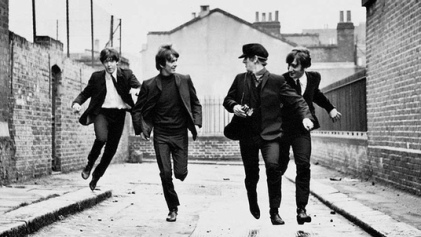 It’s a rare and beautiful thing that something that should in any sane universe be nothing more than a phoned-in cash-grab is in fact one of the great pieces of pop-anarchism ever essayed on film. A Hard Day’s Night, the film accompanying the album of the same name (the Beatles’ first all-time classic album) in 1964, played a big part in asserting the band’s dominance in the Western world. And, intentionally (wonderfully) it has no real narrative. There’s something in here about the boys and how they get caught up in protecting an old man from his own tomfoolery while they are dealing with preparations for a TV show they are to appear on. But this is merely a clothesline for not only a series of great jokes and gags and the film’s central tension between its technique and its content, but for one of the most thoroughly deconstructive pop manifestos ever committed to celluloid.

On the surface, the film is documentary-like. It’s filmed in low-quality film and often emphasizes hand-held messy camerawork.  It lacks a plot, intentionally, to convey a birds-eye view of the daily lives of the world’s newest sensation. In some form it plays like Britain was jealous of the mind-bending quantity of stupendous European gritty new wave films released during the late ’50s and early ’60s and wanted to attempt one of their own. Then worried about its chances for success on audiences raised on more traditional fair, they put their biggest export in the film as if to ensure some success and, hopefully, to introduce it to new audiences. Who wouldn’t want to see a documentary-like expose of the Beatles’ daily lives?

This is all well and good, except for the fact that their day entails endless mishaps, running around, zany situations, and general tomfoolery, in that order too. The film, truly, is anything but a documentary: it’s a madcap, anarchic piece of mischievous Marx-brothers style uproar. It’s about the simple pleasures of these four hooligans playing tricks on people as they go about living the lives of kids, only to have the tables turned when an old man they are tasked with guarding ends up the most childish of all. The film is filled with wonderful little moments, such as when the boys are told they can’t leave their room, quite literally, until they finish all their homework, which in this case is to answer fan mail. Naturally, this occurs after they are handed an inhuman load of mail, with the camera making sure to observe the inhuman efforts of the man carrying in the mail. It’s a study, above all, in four boys who know nothing other than being children tasked with responsibility and coming up short-handed.

More generally, the film is just the epitome of innocent chaos. It essays pure, ebullient joy, a joy of life. It’s the rare film that one gets the sense is just happy to exist and to try new things out – it feels, appropriately, like the product of a child with a movie camera. As the four lads run around and enjoy their day, it quickly turns dangerous but only in a don’t-be-naughty-you-won’t-get-your-dessert kind of way. It loops around and eschews form, often doubling back on itself and lounging around when it should be spry, and finding itself spry and loopy when it should take its time. Several sequences are anarchically uncontrolled, with accidental images and blunders (most famously when George trips in the opening images) kept in the finished product for their honest tomfoolery and energy.

Best of all, it’s all a direct reflection of the social mores of the time, when classical Hollywood formalism was giving way to something more care-free in the filmic world – this is that energy matched to its ultimate pop-culture proponents. The same, likewise, goes for social repression (light comedy in one bit revolves around the inability to simply mention anything about bathrooms or bodily function in public or private, instead leaving people to strangle themselves with having to maintain “proper” language and not come to terms with more honest language on their minds).

The Beatles of the film fly in the face of all this, answering reporter questions with snarky non-responses that test the limits of respectable public professionalism. When John is asked how he found America, he responds “turn left at Greenland”, when Paul is asked if he sees his father, he responds “no actually we’re just good friends”. The best two are saved for George though: when asked the name of his hairstyle, he retorts “Arthur”, and his response to “has success changed your life?” is a dry and stoic “yes” and nothing more. Ringo’s response, when asked what kind of music he plays (“mod or rocker”), best serves as the film’s manifesto: he’s a “mocker”. Snarkily, it isn’t the least bit absurdist either –  it’s filmed with a distant realism but it’s not an accepted reality in the film’s world. We aren’t supposed to assume this is what passes for normal here –  the reporters are clearly flabbergasted and the fab four are not existing within an absurdist reality but challenging a stodgier accepted reality. They know they’re shaking things up, they laugh about manipulating the reporters’ words, and they are proud of rejecting the norms of human interaction. Ultimately, they don’t care –  they’re kids, and they want to shake things up. The absolute best thing about the film is that it sees eye to eye with them.

We are treated to lots of songs, of course, all of which are expectedly terrific and capture the simpler side of the band’s earlier music (A Hard Day’s Night, the album, was where they mastered the sound of simple pop before, realizing they’d done everything they could with the form, they had no choice but to go off and change the world) and the raw, even inhuman joy of their fans. The camera knows the sheer silliness of Beatlemania – it captures it with a sly wink-and-a-nod when it focuses on rapturous fans throwing themselves at these simple tricksters who are here anything but sex symbols. They are immature figures put on stage as if they were playing “rock band”, but they’d much rather being doing something more meaningful like oh, say, running around in circles on a field just to enjoy the very life-ness of life. They don’t act like “adult” people, not for a second, as the film pokes fun at the very childlike image of the band to older viewers and the cheerful simplicity of their music by capturing a sort of visual version of the raw kinetic pop they staked their claim on in the first place. They are constructs here, obviously and nonsensically faked to render them, as their managers had advertised them and their fans had wanted them, unreal and larger than life. It’s a good thing they cheerfully take it all in stride – they’d much rather be playing games, and the film is having fun with the idea that they are really just doing so on stage too.

But the masterstroke is that pseudo-documentary form the film takes. It’s a truly subversive decision, a cheeky commentary on the very idea of the documentary as a form to capture “reality”. It never moves away from this, committed to its faux-realistic aesthetic in one of the all-time style and subject anti-harmonies. It pretends to be a film about the Beatles as people, but it is in reality a film about “The Beatles” as an image pretending to be people. It is a reflection of how we can never truly know the Beatles as people, for their public persona has come to define them.

This film is that image taken to its logical extreme; it lightly mocks us for any desire we could have to understand a subject through a “gritty documentary-style” film, going so far as to gently poke the neo-realist movement and the New Wave as an attempt to both find “truth” and admit that film is a lie (although the New Wave would probably agree with this film’s assertion as well). “The Beatles” and “honest reality”, pop and truth, do not work together, and the film knows this contradiction and celebrates it with an untamed spirit. The two are gleefully at a perpendicular angle, and this gives the film a surreal air, as though it is the “real, documentary” life of adults as if made by children freed from the restraints of adult life. It simultaneously upholds the wonder of childhood and mocks it –  it plays like cotton candy with a sharp, cinnamon coating. Or maybe like cotton candy mixed with wine. If that sounds disgusting, the film works because it has the rapturous confidence and good grace to know not to care.