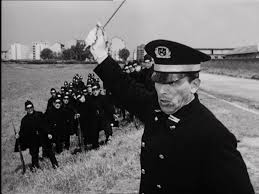 I have not been cagey or guarded, although I may be a tad evasive from time to time, about my feelings on the neo-realist movement. Its importance to cinematic history needs no defense from me, but whatever role they served in the late ’40s and early ’50s, the limits of their technique should not be avoided. Realism in cinema can be bracing, and it was devoutly essential in the late 1940s, but a completely tethered commitment to the style is a limit to say the least. Of all the things cinema is capable of, realism is not the only worthwhile tempo for a film to play by. The freedom of realism can and often becomes its own prison. END_OF_DOCUMENT_TOKEN_TO_BE_REPLACED

You couldn’t find a more idiosyncratic director in classic Hollywood than Robert Wise. Sweaty potboilers, abstracted populist science fiction, howling horror, atomic age message pictures, and gilded, gloriously melodramatic maxi-packed musicals. All bubbled under his domain. Plus, he contributed the insurmountably essential, firecracker editing for no less a picture than Citizen Kane back when he was still in his pre-directing days. He was something of the ultimate Hollywood jack of all trades, and it is true that he wasn’t the greatest master of any single genre. But he was more than a shadow passing through genres as a director-for-hire. He put his personal stamp on every film he ever touched, and he never gave a picture less than 100% of his charisma. END_OF_DOCUMENT_TOKEN_TO_BE_REPLACED

The two principles of David Lean’s Brief Encounter never consummate their love, or even acknowledge it, but of all the movie characters to have fallen in love over the past century, no two may mean more than Laura Jesson (Celia Johnson) and Dr. Alec Harvey (Trevor Howard). When they meet at a railway station cafe, they fall for one another, but they are denied their romance by social convention; they are both married, and, although the film doesn’t state it, the then-knowledgeable sense that divorce was frowned on in their world becomes palpable almost from the first instant. Which is the essence of Brief Encounter: not ashamed of itself and totally sincere, but minimalist and hauntedly hinting when other movies would openly declare. More than realism, Brief Encounter is the ultimate study in unfulfilled love and the quiet doom of knowing the end is near, only to have it forced upon you against your own terms. END_OF_DOCUMENT_TOKEN_TO_BE_REPLACED

In 1945, Billy Wilder was still becoming himself, but he wasn’t a Hollywood newbie. The Lost Weekend, would win him two Academy Awards for writing and for directing (he would win again for writing in 1950 for Sunset Boulevard and become the first person to win separate Oscars for writing, directing, and producing in the same year with 1960’s The Apartment). It would firmly plant him in the big leagues of Hollywood, but the picture was made on the back of his supremely successful hard-boiled exercise in nihilism, Double Indemnity, from the year before. In this light, had it not been for Double Indemnity, it would be easy to claim that The Lost Weekend just wasn’t quite there yet, or that it was still the product of a director and a writer identifying their place in Hollywood. But then, Double Indemnity burns with Wilder’s patented fiery brand of ice, and The Lost Weekend is merely a sharp noir in full-on potboiler mode. Good Wilder, surely, but not Wilder at his best. END_OF_DOCUMENT_TOKEN_TO_BE_REPLACED