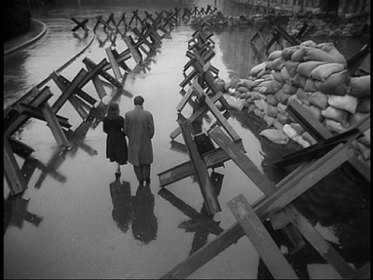 If you are a cinephile, it is a fair guess that you have seen your share of war-time romances, one of the stodgiest of all film sub-genres. But that does not mean you have a Soviet war-time romance, nor have you seen a Mikhail Kalatozov war-time romance. Kalatozov is one of the masters of world cinema (his later Yo Soy Cuba is both a passionate ode to a lifestyle and a perplexing, dumbfoundingly beautiful exercise in pushing the heights of camerawork to impossible achievements). He is not nearly as well known today as he ought to be (but the same can be said of all post-Eisenstein Soviet cinema, excepting Tarkovsky), largely because political lines in the sand were well entrenched by the time Cranes was made. He was bound to the lingering death of existing in a world with more interest in denouncing art than expressing it. At least Cannes got it right, putting political qualms aside and awarding The Cranes are Flying the Palme d’Or for its luminous artistic achievement, transcendent performances and craft, and its stunning ode to love and loss in a world that no longer knew the meaning of the former term. END_OF_DOCUMENT_TOKEN_TO_BE_REPLACED