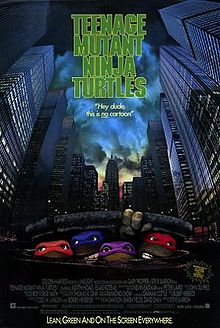 With the TMNT reboot-sequel releasing soon, reviews are out and – shock – not appealing in the slightest. Here’s a look back at, low standards for the franchise kept close to the chest in this statement, what remains the best filmic adaptation of the Teenage Mutant Ninja Turtles comic/cartoon/media empire.

A pop-culture heavyweight in its day and still lurking in the mental wings of filmgoers of a certain age, Teenage Mutant Ninja Turtles is more curio than feature film. Perhaps surprisingly though (a cringe-inducing accent or two aside) the film never threatens out-and-out embarrassment. The screenplay by Bob Herbeck and Todd Langen certainly is a wildfire spreading across the countryside, jerking around the general consensus of “four turtles battle metallic-suited abstract evil” about as abominably and arbitrarily as possible. But the insouciance of the picture allows it to slide, far more than any of the subsequent pictures in any incarnation of the franchise, into the free-wheeling, quasi-absurdist realm of animated television rather than feature-length cinema. Which, for a work called Teenage Mutant Ninja Turtles, is probably for the better compared to, say, a work like the 2014 reboot that tries to pretend it is an actual flesh-and-blood motion picture.

So this 1990 Teenage Mutant Ninja Turtles, unlike the grotesquely Bayified 2014 incarnation, acclimatizes itself to a personality of its own, however goofy it may be. Truthfully, the ramshackle manner of the tonal mismatch inherent to this adaptation of the comic book and animated series is both uniquely tethered to its forebears and amusingly, adolescently reckless all its own.  Rather than settling into a stable groove of its own, this TMNT impulsively conjoins low-key layabout slackerism, complete with a reticence to indulge in the niceties of storytelling, with its polar opposite in a semi-manic overdrive of hellish, nearly dystopian New York straight out of Ed Koch’s worst nightmares. As a motion picture, it’s a little slice of insanity that prefaces the David Dinkins-era acid flashback that would become the Super Mario Bros film. But while that later Frankensteinian amalgamation of nightmares far and wide eventually caved in on its own inanity, becoming a filmic adjunct to logic in the process, TMNT is relatively capable of crossing its own tonal streams and subscribing to its split personalities without turning catatonic about it like the positively demented Mario Bros.

Bestowing it with the label of “quality” would induce a hernia, so let’s not go that far. But the film’s hell-caked vision of New York City as a hopeless existential void diamond-cut with a looney, spinning carousel of slippery silliness is, at least, a messiness that feels like an aesthetic rather than an antiseptic. Director Steve Barron isn’t liable to be confused with an auteur on the merits of his work here, but the quasi-Gothic mise-en-scene he and fog-minded cinematographer John Fenner conjure is not only evocative but an effective foil for the camera that at least involves itself as a participant in the action rather than simply, placidly falling asleep in the background. Certainly, the film is prone to a few bouts of narcolepsy – Josh Pais’ pizza-encrusted accent as smash-mouthed rabble-rouser Raphael chief among them – but on the whole, the sobriety of the visuals and the lunacy of the screenplay engage in a contorted quarrel for control of the film in a way that keeps Teenage Mutant Ninja Turtles from ever lulling into sleepy complacency.

Speaking of Pais, who is the only turtle performer to voice and physically embody the costume of their character, he plays the somewhat slimy, rough-and-tumble Raphael, whose brothers are the take-charge, level-headed Leonardo (David Forman suited, Brian Tochi on voice), the flippant, nebulous surfer-bro Michaelangelo (Michelan Sisti suited, Robbie Rist on voice), and the ever-startled techno-wiz Donatello (Leif Tilden suited, Corey Feldman on voice). Raised by rat Splinter (Kevin Clash, puppeting and voicing in a noble, Henson-esque feat of animated characterization) to fight crime with ninjutsu, they team up with reporter April (Judith Hoag) and brutish vigilante Casey Jones (Elias Koteas) to take down the vile Shredder (James Saito, with occasional voice by David McCharen) and his nasty, impenetrable clan of ninjas.

It’s all fundamentally trivial, which is admittedly to the film’s benefit as often as it is a detriment. Wearing its small-scale, independent-minded budget on its sleeve, there’s precious little in the way of obvious world-destroying maximization of consequence on display here; the screenplay, terrible though it may be, is content – perhaps because of its ineptitude – to leave the world-erupting stakes by the wayside, letting the conflict simmer on a more jovial level. Functioning as a sort of dark jester of a film, moody though it may be, it doesn’t preempt the modern comic book film with a numbing mournfulness; instead, the grubby mise-en-scene is a counterpoint to the convivial atmosphere of the dialogue, rather than a suffocating, omnipresent wallow in the mud of self-pitying serious cinema. Like a good inner-city rumble, everything is kept low-to-the-ground rather than high-minded. This is, after all, a film about defending the streets and the sewers you live in, rather than saving the world.

Which is a roundabout way of saying that the film approximates a kind of accidental glee, like a party and a hangover in one, the spirit child of mismatched buddies. The darkness is only enhanced via its position as understudy rather than foregrounded monstrosity, with the camp and the ghoulish architecture conspiring to better the sum of the parts rather than sabotage each other. Quality isn’t exactly the word, but it’s hardly half-assed, and the momentary fits of ineptitude are endearing rather than stultifying.

Plus, at any rate, the Henson creatures given breathless life for the film are worthy of the price of admission alone. The turtles themselves are graced with tactility, personality, and pliability in their architectural construction of reptilian figures enlivened with a sense of physical presence not yet matched in any of the ensuing films. Perhaps it’s a small pleasure compared to, I don’t know, Goodfellas or Do the Right Thing (to name the two obvious films from the turn of the ‘90s with vastly more thorny visions of life in New York City). But a pleasure it is, and Teenage Mutant Ninja Turtles counterbalances every failure with a pleasure of equal value and, on balance, a smidgen more.