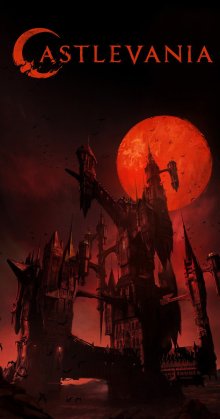 Insofar as Netflix’s Castlevania “television show” is a wobbly forward half-step for video-game adaptations, it is because of its commitment to unbottling the aesthetic-first spirit of classical video gaming and relishing the principles of form, geometry, and negative space, all brandished here with a suitably diabolical disposition. If nothing more, it makes a convincing case for animation as the obvious cinematic corollary to video gaming.

Probably hoping to hook-line-and-sinker the fanboys for a presumable season two, the show’s dubiously titled season one (a scant 90 minutes splayed out over 4 episodes) forego the best route for a Castlevania adaptation: a down-and-dirty, one-and-done, tightly-limned genre-pic, a Gothic revival Halloween costume for The Raid. Something rough, rowdy, and ruthlessly pared down would be the platonic ideal, especially considering the truncated runtime. With 90 minutes and wider aspirations though, Castlevania ends before it begins. The brevity is both a secret weapon and an albatross, prematurely concluding its arcs without permissive space for depth while also cutting through the moral high-mindedness with the punchy and primeval quality of great B-movie trash.

Castlevania is so short that it cannot truly inherit the residue of the grand-narrative-arch television model so prevalent these days, but it does aspire to respectable status with its questions of religious piety and social ostracization, especially in the narrative histrionics of the first episode (which is also the most evocatively animated). In the prologue, Dracula wishes death on the town of Wallachia for, at the bequest of their Christian orthodoxy, burning his well-meaning wife (who practices witchcraft benignly) at the stake. A year and an orgiastic vomiting out of demonic retribution later, fallen vampire-hunter Trevor (Richard Armitage) drunkenly wanders into Wallachia and things turn monster-hunty from there.

The first episode, a full fourth of Castlevania, is essentially a preamble to the preamble that is the entire season. The brief presentiment of Dracula’s wrath promises a genuine moral quandary before the script mostly back-peddles into a somewhat rudimentary adventure narrative as Trevor accumulates knowledge of Wallachia’s plight and gathers a duo of sidekicks. More or less, season one is doing throat-clearing, setting up the pieces for the follow-up and making sure our ears are perked up.

What humanity remains is found in Armitage, bringing a raffish sensibility to his anti-hero, hinting at an exhausted vagabond who pointedly undermines the hifalutin fantasy tripe with a brutal quality of disenchantment and wry, ground-level comedy. There’s a suggestion of that two-sides-of-the-same-coin Janus head thing every pseudo-complex genre-thing settles into now – both Dracula and Trevor are social exiles frowned on by the general populace – but it amounts to little thus far, and Armitage doesn’t have much to do except sound dispossessed.

It’s best to think of Castlevania as a prologue, and hopefully, if the series ever congeals into something truly, terribly demonic, a premonition. There are reasons to hope. The unearthly panic of the opening episode has a frantic kick, and the animation department isn’t asleep either. When Dracula possesses the very fire that burned his wife in hopes of tearing the town asunder, he initially raises not a fiery holocaust but a sensitive, lyrical passage of fiery ash descending toward the fallen people, abruptly cut against a fragmented and frigid blue mirror refracting Dracula’s uncertain perspective. The cadaverous, dead-eyed stare of the humans also comes in handy as a marker of their anonymity before Dracula and the sheep-like trance they’ve fallen into under the auspices of the church. The show’s forays into non-representational aesthetics – its willingness to limber up and delve into dream and nightmare spaces, gross parodies of real-world fears – offer a meaningful corrective to the limits of live-action and harness the power of animation as a reprieve from naturalism.

Animation boasts a non-binding agreement with the rules of the human form and contiguous geography, and Castlevania deserves credit for making the connection between animation and gaming. But Castlevania does not emancipate itself from representational geometry and really play with the opportunities and liminal spaces between external reality and internal subjectivity. There’s a scorched-earth pull to the best moments, but if the fangs are drawn, there’s much more blood to be drawn. It certainly isn’t about to go blow-for-blow with Bojack Horseman in the Netflix animation department. (Bojack is easily Netflix’s best show regardless of medium). But then Bojack also nearly drowned during its first few episodes as well. And the script for Castlevania, by noted comic luminary Warren Ellis, at least lacks the exposition-morass modern fantasy tends to succumb to like the plague. A reasonable introduction, although it’s difficult to advance more than a passing interest without a more revolutionary aesthetic sensibility or a fuller excavation of the subterranean themes. There’s always next year.