I know the post is a little late, but at least I managed to watch these films on Halloween.

Straddling the line between intentionally milquetoast ephemera and a bad-trip that brandishes shards of visual destruction, Martin Scorsese’s NYU student film is a bare-bones presentiment of his future career, as well as an elegy for American innocence (or for America’s ability to lie to itself that it ever had innocence) A 6 minute short of a young man walking into a bathroom and shaving ad infinitum until the blood of youth runs freely down his neck and exsanguinates him, the obvious and belabored parable many have read into the film is a Vietnam era America’s act of self-mutilating the American youth by forcing them to join the military.

That’s cool and all, but the formal elements are more important than the social significance, and Scorsese’s short often eludes any sort of predetermined social meaning anyway. Although there are resonances in Vietnam and social unrest, the bone-dry tone stands undoctored by the need to “mean”; whatever it may represent as war parable is only bettered by treating it simply as a scabrous slice of unfettered absurdism and suggesting that it is too bedeviling to truly mean or be classified as anything. Abetted by a brutally unmoving main character and a downright slithering backing track of mid-century Muzak, Scorsese stitches with a barbed-wire thread as he cuts between harsh-angled close-ups of domestic bathroom minutiae. Sink knobs are almost abstracted from their physical utility and approach the realm of unknown nightmare-object. The real cap though is the venomous repetition of the shaving act, a daily ritual for many men that mutates here from everyday hokum into off-kilter chill into nearly avant-garde series of unrelated close-ups of movement of a silver blade scraping at pale, innocent skin. The pure uncanniness of the color shift from pasty white to curdled blood-red, waxing from a trickle to a downpour, feels like the opening of the floodgates to an American hell known as the ‘70s.

And to the monsoon of the American New Wave, the most important movement in American film of the last 50 years.  Rough around the edges, held together by hope, and sufficiently raw, The Big Shave isn’t Scorsese at his most voluptuously cinematic and experimental. But in boiling down the director’s mischief to its essential impulses and throbs of perverse, pitch-black humor and subcutaneous social sadness, The Big Shave is hardly processed goods. 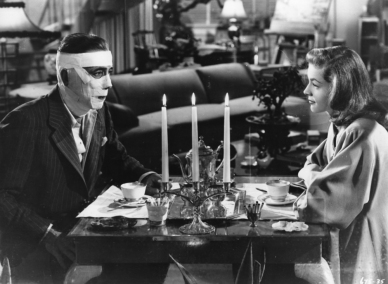 The ugly duck of Bogie and Bacall’s four-film career together, Dark Passage is guilty only by association. Taken as its own creature, it’s hardly flesh-crawling or formally perfect like the prior year’s The Big Sleep, but it has its dark-and-stormy-night appeal. The elephant in the room is the obvious POV infection in the waters of 1947, with MGM’s same-year Lady in the Lake spreading its certifiably nasty toxins every which way so that Dark Passage succumbs to the make-it-all-POV virus too. Except, unlike Lady, it doesn’t “make it all”; whereas that film went the distance with its all-first-person gimmick, Dark Passage bails out about 40 minutes in, or right around the time it would otherwise slide from effective psychological buttress and into needlessly outré exercise in masturbatory cinematic showmanship.

The late ‘40s were trying times for Hollywood, with the voluminous success of the war time years replaced with slightly sagging box offices that would only tumble further until the end of the era in the early ‘60s. With the likes of this gruesome twosome and Hitchcock’s long-take-extravaganza Rope filling theaters (and 3D to arrive a few years later), the studios were obviously in desperate need of something splashy at a technical level to keep audiences in seats. At least they were thinking about the formal principles, and the way that Dark Passage relies on POV to insinuate information rather than announce it is appealing while it lasts even if it doesn’t exactly achieve what one might call a heavenly style-as-substance harmony.

Plus, the film quits while it’s ahead and finally gives us the face of escaped convict Vincent Parry (believed to have murdered his wife and another) only after he achieves a clandestine face switcheroo at the hands of an underground experimental surgeon (there were a great many of those skulking around during this era, it seems, although the one here is hardly Josef Mengele). After the switch-up, Parry is played by Humphrey Bogart, amusingly restricted from movement via a mummy’s contingent of bandages over his mug for the next 20 minutes of the picture until nearly the hour mark is passed by. Somehow, the bandages only enhance his famous petrified forest of a face, always most superior at revealing hidden insight and melancholy – and the weight of the modern world – through staring with eyes that puncture the soul and imply great conflict lurking inside him.

From there, Bogart’s Parry is off to prove his innocence, and the film becomes overly mired in the thickets of plot when it ought to freely improvise within an effectively dreamlike, hallucinogenic atmosphere of post-War malaria in San Francisco. Once the film throws in the gauze around Bogart’s face, it’s essentially a blunt instrument meant to progress a story toward conclusion, more a bludgeon than a scalpel. But it is inspired by its (ironically) open-faced willingness to never imagine a version of itself superior to the one it achieves. Which is to say, it’s essentially a B-picture with an A-list cast, including not only Bogart’s weary eyes but his off-screen and on-screen partner Lauren Bacall in an alluring, sultry role as Bogart’s crash-pad when the heat gets turned up by the police. Sidney Hickox, a holdover from the Hawks-directed To Have and Have Not and The Big Sleep, the two prior Bogie and Bacall vehicles, also weaves a seedy shroud around Frisco with resonances in the despair and aimless search for purpose contingent to the times. He’s not treading territory (first-person excepted) that hadn’t been steamrolled over by earlier noirs, but old ground has its virtues as well.