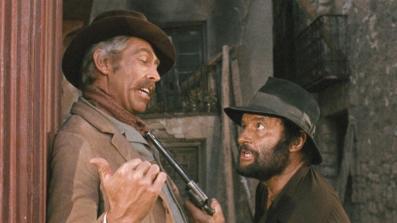 Four classics or near-classics into his career, the commercial bottom fell out of the Sergio Leone’s style, a salivating roux of lyrical, iconographic imagery and blistering aural sorcery that elevated the Wild West to the woolliest of opera halls. Released to choruses of conundrum and popular disinterest, audiences in 1972 brandished their confusion toward Duck, You Sucker! like a weapon and proceeded to fell Leone’s savage beast, banishing it to the cesspool of cinema. Which was a sure-fire come-down for a man who “did” more with the structures and iconography of the Western genre than anyone else during the ‘60s. Mere years beforehand, he’d released four indomitable works that channeled the Western into both John Ford’s rhapsodic register and Anthony Mann’s hoarse, wiry, more brutal variant of the genre. Leone’s films were alchemic, concoctions of classical A-pictures (in tone, length) and B-style hip-shooters (in mood, feel, texture, purpose even), and they were unstoppable.

Until they were stopped, orphaned by Duck, a film that itself feels orphaned between identities, moods, meanings, and characters. If popular befuddlement was the result, it wouldn’t be a difficult prognosis to make for someone watching the film before release. If A Fistful of Dollars was the template, For a Few Dollars More the dry-run, The Good, the Bad and the Ugly the full flowering, and Once Upon a Time in the West the acme where the style erupted into an aesthetic aria beyond the wildest dreams of cinema, Duck, You Sucker! is, I don’t know, a freakish question mark of some kind. But it’s Leone’s question, and Leone doesn’t cross-examine quite like you or I.

But one sympathizes with the audience 1972; that quadruple pile-on of prior films wafts and flows like butter, but Duck, You Sucker! has to churn for a while, and without stable direction. Just look at the characters. The names, Juan and John, may excrete harmonious energy, but nothing else does. In The Good, the Bad and the Ugly, Lee Van Cleef and Clint Eastwood were barreling toward each other, but they were hardly yin and yang, or even necessarily morally opposed. Their personalities even folded into one another, both clipped and reticent, secreting sangfroid in every step. Henry Fonda and Charles Bronson were right up there in Once Upon a Time: at each other’s throats, but kindred physical presences nonetheless. Leone even visualized the overlap, furnishing harmony in the characters through climaxes that melted their gazes and gun-hands together into one irrevocable tapestry. At that point, “who” each gaze or gun belonged to was almost an irrelevant narrative happenstance to Leone’s more symphonically inclined cinema where “characters” were pegs or pawns in a pure cinema play of physicality, light, and motion. Close-ups and medium-shots became spatial and geometric channels in a motion painting rather than ancillary tools for narrative in a film, with Leone’s editing subscribing to orgiastic thinking rather than continuity.

In comparison, Rod Steiger’s and James Coburn’s characters Duck aren’t a Janus Head, two opposed but nearly identical faces, but embodiments of the comedy and drama masks, even though neither knows which is which. Steiger and Coburn are fire and ice, the former overtly bamboozled and overbearing as Mexican bandit Juan and the latter, as ex-IRA revolutionary John looking to sell his talents as a dynamiter for the Mexican revolutionaries, is as sly as a fox and as wittily pitiless as a gun wrapped in Graucho Marx. Steiger’s character imbues every silence with bodily emotion and aural frustration (and Method-y frustrations) while Coburn’s calculations reverberate almost inaudible hushes throughout the film’s boisterous balletics of blood. Stumpy and gangly, they’re two miscreants cast adrift like this Western hell’s Abbott and Costello.

And as for what to do with them, Leone defaced things even more. He massages both revolutionary necessity and revolutionary condemnation out of the two men who run around like bullets in this grotto of a conflict, easily the ugliest (in the best way) of Leone’s Western tableaux and yet more wily and operatically radiant still. If the performances are merely asymmetrical, the tone is wily-nily, but the result is only necessarily a parade of misfiring neurons if you decided to view it through conventional Hollywood crystals. If one chooses to cotton to Leone’s warped, peculiar tempo, instead, one reveals the film’s contrapositions as channels for Leone’s further estrangement from the impersonal Hollywood machine. While the previous four Leone Westerns, at least the latter two undoubtedly superior films to this one, followed relatable mood structures (if not narrative ones) from adagio to allegro to eventually climaxing in a fever pitch of catharsis, Duck alternates furiously between excitable and stoic with feverish indecision. While bedeviling, the jumble relays a vision from a filmmaker taking the world for a long, exploratory walk and realizing how fascinatingly uncertain at a structural and formal level that world may be.

Which speaks to Leone’s consciousness about the world emerging out of his indecorous battiness, a consciousness always secretively but inviolably furnished in his visuals that were always at once dreamy and recklessly cosmic but also inextricably tactile and earthen, as if hewn from the world beneath him. The overcast enchantment and dazzling desert shimmer of his films camouflage the dirt and the soot underneath; the enormity of the visuals overlay pointedly mangled reflections of loss and sorrow, people doggedly pursuing ideas and calcified visions to their bitter ends, without even questioning how or why they got there or what to do afterwards. Revenge was always the subject there, but in Duck, an even more disenchanted film, the futility of the world itself is etched into the tarnished beauty of the film’s mise-en-scene, which is less self-consciously eloquent, enchanted, and beautifully cathartic than in most Leone films.

Denied the visual catharsis and supple aural locutions so many audiences expect out of a Leone film, Duck, You Sucker! initially feels wayward. But this is a false premonition; Leone’s colloquial, personal cinema caresses your eyes and ears and slithers its way into your soul, channeling largo rhythms into cascading on-screen bedlam and momentum of a different, more unfurling variety. The cinematography by Giuseppe Ruzzolini, working for the first time with Leone, is more intimate and less obviously resplendent than Leone’s prior films, but it’s still sun-scorched and if possible even more of a sweating canvas for the perpetual betrayal and backstabbing within. The relative dearth of wide-shots (compared to a typical Leone film) and comparative visual clutter of the images deprive the film of its expected oxygen, sometimes denying the audience establishing shots and dissolving visual continuity in a harried reflection of the ambling tonal and philosophical disarray we get in place of the rip-roaring adventure we expect. But it’s all part of Leone’s exploded vision here. The sonic and visual aerobics of the earlier films are now over-energized into a whirling dervish of a film without any stable grounding point.

Even the tonal vibratos back and forth from comedy to drama evoke a messiness that feels liberating in Leone’s wide type-set, boldface cinema, secreting machismo along with more unclassifiable, weasily auras of absurdist comedy and “what are we all doing here?” melancholy. It’s the most disjointed of his films, but those who would decrement the film for it should hightail themselves to more safeguarded cinematic realms; there’s a woolly, screw-loose, Looney Tunes quality to the work that, for every “Leone’s up to his old tricks again”, introduces another moment of chaotic bliss that might have signaled another future for the director who never quite found his place in an era where Westerns were subjected to the false dichotomy of “classical” and “revisionist”. Needless to say, Leone’s Westerns, both optimistically otherworldly and pessimistically distressed, dynamite that particular bifurcated edifice. A one hundred horse army couldn’t fill the chasm left in his wake, or drive through some of Leone’s bravura imagery.

So the fiber here isn’t as easy to follow as Sam Peckinpah’s The Wild Bunch, since Leone electrically channels a style that is more hostile to realism than Peckinpah’s animated imperative for grisly violence. In fact, The Wild Bunch also hues more closely to the wry, sarcastic, but sincere mysticism more commonly associated with Leone’s films; it just mediates the otherworldliness with buckets of beautiful blood. Leone’s film is more unsure of itself, pivoting all around, in contrast to Peckinpah’s uber-confident flourishes. The Wild Bunch is seared; Duck is all burnt ends.  Some might consider Leone a stubborn mule, but Duck, You Sucker! delights in poisoning the well his films drank from beforehand. “The revolution is not a social dinner, a literary event, a drawing or embroidery; it cannot be done with elegance and courtesy. The revolution is an act of violence” as the opening quote suggests. And, well, if you’re going there, you’ll find no driver of more temerity than Leone. In his hands, the statement feels not only like polemic but pragmatic poetry. Misshapen though this film is, Leone’s vision remains fully erect. Giu la Testa is right.