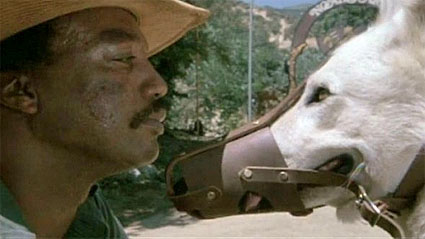 Two Sam Fuller films this week for Midnight Screenings, one from the very beginning of his career and one from the mature, weary Fuller nearing his end.

You just want to feel bad for White Dog. No film should be subject to the dogged (excuse the pun) beating Samuel Fuller’s 1982 social expose was, especially coming hot on the heels of the studio absolutely decimating Fuller’s seminal 1980 war picture The Big Red One. Even a worthless production shouldn’t have to wait over a quarter-century to receive any meaningful public exposure after failed preview screenings. No film, I say, should bear this sort of weight. But especially not White Dog, one of the greatest films to even glance at racism head-on. After the film was shunned from theatrical distribution in 1982 and Sam Fuller grew disinterested in making American film productions ever again, its eventual release by Criterion 25 years late is no great consolation prize.

The controversy around the film cuts both ways, however. Sure, its delayed release was a tragedy (which is, after all, how you know it is a picture worth a damn in the first place), but at least it can be viewed in all its hard-boiled glory today. White Dog feels like the New Hollywood treatment of racism America actually needed, and it arrived a full fifteen years after the “actors and good intentions” movie In the Heat of the Night, which suffocates on the weight of its performances and the self-congratulatory back-patting it spends most of its run-time doing (with the positively soporific Guess Who’s Coming to Dinner released the same year, liberal white folks finally had race-movies positively in love with doing nothing but congratulating white people for overcoming their prejudices, without meaningfully asking much else of them).

Unlike those films, White Dog is a legitimately confrontational motion picture, which is likely the reason it was eschewed and shunned for so long. The fact that it earns this controversy is also, naturally and as things are wont to be, the reason why it needs to be seen. In the Heat of the Night and Guess Who’s Coming to Dinner are notable lectures for their historical significance and for Sidney Poitier, but White Dog is an honest-to-god motion picture, a screaming howl into the night and an unleashed jaw ripping right into the throat of racism.

What is White Dog? A searing, scathing editorial on indoctrinated racism, a hallowed, head-shaking question about the slim hope for escape from the backwoods memories of American history, a nervous potboiler masquerading as a message pic? All of the above, and it is also a dog. A white dog, in more ways than one. When Julie Sawyer (Kristy McNichol) runs over and wounds a white German Shepherd, she takes it home and it saves her from a rapist. Unbeknownst to Julie, however, the dog had been trained to maul and kill African-Americans on sight, and when she keys into this realization, a black dog trainer named Keys (Paul Winfield) takes it on himself to recalibrate the dog, with his life at stake in the process.

Fuller, who also co-wrote the screenplay, had long been a rabble-rouser, but with old age approaching him in 1982 (he turned 70 the year the film was released), his fire had burned away some of his passion, and wither was showing. Not stodgy wither, however. Simply melancholic wither. Previous Fuller films such as the incomparable electro-shocker Shock Corridor from 20 years before turned their targets to ash; they knew no qualms about their rage against the machine, but White Dog paints a different picture. By 1982, burning against the light (or turning the light back on to itself) had curdled into a hopeless question mark, and White Dog, arguably for the first time, sees Fuller exsanguinated from the decades of fight. With White Dog, he doesn’t shock the masses. He laments them, and he quietly digs a hole America may never be able to escape from. White Dog is not the headline-grabbing editorial to the masses sensationalizing about the murder (usually Fuller’s best mode). It is, instead, the clean-up crew mercilessly and observationally documenting the tragedy that had befallen the victims lying before them. This isn’t a film angry about racism, but a film that had lived through the anger, and like many activists throughout the ’70s, had grown raspy and hardened with age.

Not that Fuller’s detective-like filmmaking had blunted over time. If anything, White Dog is a natural progression of Fuller’s skills, and the specter of death and desperation around the film are only further char-broiled expressions of the melancholy looming over all Fuller films. He directs with a cold flair for the no-nonsense exploitation films he lived in the gutter with for decades, creating a work of B-picture suggestion and melodrama. Metaphors abound, but the horror-tinged lighting and grisly, voyeuristic camerawork ground the film and keep it away from needless philosophizing and false intellectualism. This is racism from the gut, and the way Fuller plays with the imagery of the pale white dog, showing it transform from naïve, innocent child to wonton, intentional killing machine on the drop of a dime affords the film the caliber of an allegory, with the dog standing in for white society, and white children specifically. They have learned racism, and as White Dog shows it, black people, the victims, have also been tasked with fixing these wounds, often risking their lives in the process. Fuller has little to gift this society, except an estimation of fallout that includes the whole nation.

The dog’s eyes and paws become portals into vexing, nebulous, even unknown hatred. Its reactions are both ingrained and instinctive, so much that they register as passive reflexes more than conscious actions, a statement on Fuller’s behalf of the almost pre-cognitive reflexes and de-cardio racism of everyday actions such as clutching a purse or looking the other way when ebony skin passes by. White Dog evokes not only conscious racial hatred, but the nastier, more permanent region of the unconscious such that racism has become complicit with everyday fear. Whites do not even have to exercise conscious racial hatred to discriminate against non-whites; the discrimination has become part of their bones. The bold, sensory-first confrontation between the innocuous innocence of the dog’s star-gazing eyes and the flick-of-the-switch transformation into impenetrable hatred and ravenous disgust is quintessential Fuller harsh-contrast, making no bones about the seeming innocence of an America built out of discriminatory girders. Fuller shows us just how bluntly oppression can always masquerade behind a smile.

Fuller’s film is, if anything, horror, but there is a heady and complex suggestiveness surrounding the melodrama of the piece, which favors a certain heightened dialogue delivery and wooden acting that plays both on classical American dog stories (think Lassie or Old Yeller) and sitcom Americana. In doing so, the film evokes the calibrated manipulation of American weepies and childhood stories and implores us to debate with how the dog, like a child, had been manipulated by the dark side of this American melodrama. The film explores, essentially, the pageantry and melodrama of American racism, of the heightened malarkey that convinces men and women to imbibe in racism. It is told in the tempo of an old paperback potboiler or a dime store novel transplanted to a gee-shucks television episode.

In doing so, Fuller implicitly asks us to beg the connection between, say, Lassie, or Old Yeller, and the rabid discrimination families in that time period fed their youth. By filming his piece like an old American Dream TV show turned into a nightmare, he asks us to question when the old sitcom family’s sense of “fun” started to become creepy and unsettling. He asks us to wonder what they were hiding, what sort of hell existed in this old sitcom life, to question what hate and superiority might brew beneath. Their dogs might have even picked up on the hate if they were paying attention. White Dog, thus, is a critique of the style of American media, and not simply American life.

All of this is wrapped in a package of grisly chills that slide right into expressionist Southern sludge, screeching and scowling when need be. Racism, in a Fuller film, is lit with the fires of hell, and the repeated visual connections between burgeoning slasher cinema (this was 1982, arguably the peak of the commercial slasher, after all) vocalize the horrors of racism with scabs. In particular, the shots of Winfield’s weary hand up against the white mouth of the dog are fraught with shivers (these shots frequently make startling use of depth-of-field). The images also play off of white hunter imagery (here the black man is tasked with the commanding role, and the beast is white). Winfield exudes quiet dignity in his role as a black animal trainer who seethes with the desire to prove he can “fix” racism, and a man who carries on his shoulders the weight of the knowledge that he alone bears the burden, and that he alone is trying to be the “better man”. In the end, the film has harsh words for the better man idea.

The end is an explicit critique of the claim many whites make that black people need to resort to “positive” or “non-violent” solutions to fight racism. Keys is dead-set on proving that he can end racism without violence, like so many black film protagonists before him. He is of the Guess Who’s Coming to Dinner tradition, and White Dog is one of the few American films to doubt that perspective, to imply that black respectability and non-violence isn’t going to solve the problem. It is one of the few films to suggest that black respectability is a solution designed to benefit white people, not black people, a solution designed to keep black people from pursuing radical action. It is one of the only films to suggest that, in the end, whether we like it or not, putting down the spirit of racism with violence may be the only solution. Sometimes, trying to “fix” the white victim of racism – the child, or the dog, turned into a racist by their parents and society – forgets the piling-up black victims and perpetuates the cycle of racism even further under the mantle of “good intentions”. White Dog wonders, loudly and boldly, and then wearily, whether we really ought to just take the old racists out back and give them a taste of their own medicine.